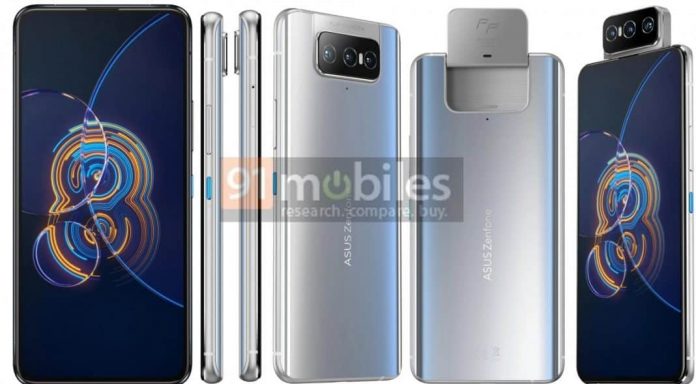 Zenfone 8 series will become official on May 12th. While the countdown for the promotion continues, a new leak reveals the design and technical features of the two members of the series, Zenfone 8 and Zenfone 8 Flip.

As the name suggests, Zenfone 8 Flip has a rotating camera mechanism. Asus previously preferred this mechanism in the Zenfone 6, 7 and 7 Pro models. It is stated that there will be three sensors in the camera module of Zenfone 8 Flip.

It is said that the 64-megapixel main camera will be accompanied by an 8-megapixel telephoto camera and a 12-megapixel macro camera. It was stated that it would be possible to record 8K video with this system. Zenfone 8 Users will also use this system while taking selfies and video calls.

Zenfone 8 Flip will come with a 6.67-inch Full HD + display. There will be no notch or camera hole on the AMOLED panel with a refresh rate of 90 Hz. This screen is expected to host the phone’s fingerprint scanner as well.

At the heart of the Zenfone 8 will be Qualcomm’s Snapdragon 888 processor. This processor will be accompanied by 8 GB of RAM and 256 GB of storage. The 5000 mAh battery with 30W charging support is also considered among the features of the phone.

It is also among the findings of the leak that the Zenfone 8 will come in two color options and will weigh 230 grams.

The standard Zenfone 8 is expected to be the “mini” model of the series. It is stated that this phone will have a 5.92 inch Full HD + resolution screen. In Zenfone 8, the front camera of the phone is placed in the hole in the upper left corner of the screen.

On the back of the Zenfone 8, there are two sensors and a LED flash on the camera island. It is stated that the 64-megapixel main camera will be accompanied by a 12-megapixel macro camera. 8K video recording is also made with this phone.

It is stated that the Snapdragon 888 processor will be accompanied by 8 GB of RAM and 128 GB of storage in Zenfone 8. However, 6, 12 and 16 GB RAM and 256 GB storage options are also expected to be offered to users. A 4000 mAh battery with 30W charging support will provide the phone with the energy it needs.

Asus Zenfone 8 will weigh 170 grams and will appear before users with two color options. 3.5 mm on the top edge of the phone. It can also be seen that there is a headphone jack.