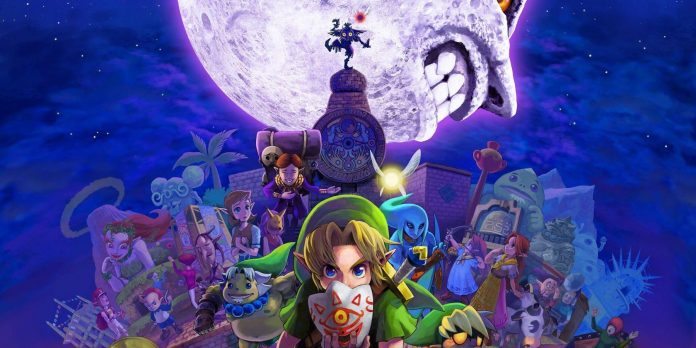 Despite the fact that there is no shortage of Zelda games, one game that fans often remember fondly is Majora’s Mask. Majora’s Mask, the next game in the series following the critically and commercially successful Ocarina of Time, had high hopes for it. Fortunately, in the eyes of many gamers, it was a success, becoming one of the best-selling games of the Zelda franchise. Recently, a talented gamer decided to make fan art on this classic game for the N64.

A Reddit user under the nickname itzaspace shared a photo he took based on the mask of Majora. In particular, a Reddit user decided to make animated wallpapers using pixel graphics. Although the game was originally a 3D game, this reimagining of the game in 2D worked incredibly well.

On the animated wallpaper published by itzaspace, you can see Link resting by a picturesque stream in a pleasant forest next to his horse. Meanwhile, the School Kid, dressed in a terrifying Mask of Majora, was sitting on a stump. One of the highlights of the design was the rays of light penetrating through the trees. The artist used the animated nature of the wallpaper so that the brightness of these lights dynamically increased and decreased. In addition, the fairies Tael and Tatl were fluttering in the air nearby. To complete the scene, the title “Legend of Zelda: Majora’s Mask” was visible in purple at the top of the image.

Unsurprisingly, this gorgeous artwork featuring Link and the Kid’s Skull from Majora’s Mask has attracted the attention of numerous members of the Zelda community on Reddit. In just one day, animated wallpapers have already gained more than 4.5 thousand votes. Many appreciated the look of the design, and one gamer enjoys the pixel art style used by itzaspace, noting that it made them want more Zelda games with this type of design. In addition, many users have noted that they can’t wait to download these wallpapers for use on their devices.

Although these beautiful animated wallpapers based on the mask of Majora are impressive, this is not the only fan art created by itzaspace. A talented artist made other wallpapers with a Link. For example, they previously created an animated picture that represented what the title screen of Breath of the Wild would look like with the aesthetics of SNES. They also made wallpapers with characters from Skyward Sword and The Windwaker.

Many fans are undoubtedly pleased to see how members of the Zelda community come up with beautiful illustrations depicting characters and locations from the cult series. Breath of the Wild 2 news is expected to be released in the coming months, and it will be interesting to see if itzaspace decides to make animated wallpapers based on this game. Only time will tell, but it will most likely make an impression if they do.

The Legend of Zelda: Major’s Mask is now available for Nintendo 64 and Switch via the Nintendo Switch Online expansion pack, and an improved port is available on 3DS.