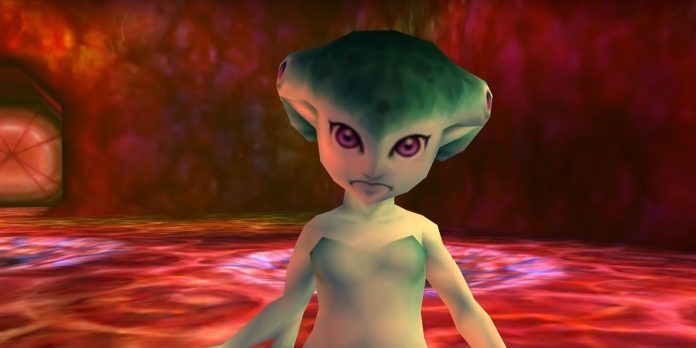 The Legend of Zelda: Ocarina of Time has a mix of both endearing and strange characters living in Hyrule. Princess Ruto is among the few important characters who have the ability to offer Link substantial help in his journey. However, first meeting Ruto is difficult because she ended up in the stomach of the deity of the Zora, Lord Jabu-Jabu.

Ocarina of Time follows Link as he works to save Hyrule from Ganondorf, who wants to take over Hyrule and reach the Triforce that has been sealed away in the Sacred Realm. Princess Zelda, having sensed the evil from Ganondorf, asks Link to gather the Spiritual Stones required to open the Sacred Realm to prevent Ganondorf from being able to take the Triforce for himself. Link plays the role of hero and fulfills his destiny in Ocarina of Time, while Ganondorf goes on to eventually become Calamity Ganon seen in Breath of the Wild.

Related: The Song Of Healing Stole One Zelda’s Lullaby Power

Princess Ruto, as the only child of King Zora, is the attendant of the Zora’s patron deity, Lord Jabu-Jabu. As his attendant, Ruto prepares and serves Lord Jabu-Jabu’s meals, which put her in the perfect position to be swallowed by him. While Ruto gives a partial explanation as to how she ended up swallowed by Lord Jabu-Jabu, it doesn’t cover the whole story or all the circumstances that led to her needing Link to rescue her on behalf of King Zora.

As is the case with many Zelda games, the bad events in Ocarina of Time can be traced back to Ganondorf and his influence, an influence that would turn Jabu-Jabu’s belly into one of Ocarina of Time’s worst dungeons. Before Link is called upon by the Great Deku Tree to begin his journey, Ganondorf tried to get the Spiritual Stones needed to open the Sacred Realm himself. However, he was denied the artifacts. In retaliation, Ganondorf cursed both the Great Deku Tree and Lord Jabu-Jabu.

This curse is what led the Great Deku Tree to summon Link and ask him to go inside the game’s first dungeon and defeat Queen Gohma, who was the source of the curse. After succeeding, Link is told about Ganondorf’s plans and given the Kokiri’s Emerald before he’s sent to meet with Princess Zelda. Having to collect the rest of the Spiritual Stones, Link seeks the Zora’s Sapphire – Ocarina of Time’s symbol of love – last, which leads to him being allowed to meet with Lord Jabu-Jabu for the sake of saving Princess Ruto, who has vanished and is discovered to have been swallowed by the patron deity of her people.

Much like the Great Deku Tree, Jabu-Jabu has noticeable symptoms of Ganondorf’s curse, and this is what prompts the Zora to stop allowing him visitors. After an exception is made for Link, he enters Jabu-Jabu’s stomach and finds enemies that have appeared due to the curse. Link meets up with Ruto in Jabu-Jabu and works with her to find the Zora’s Sapphire, which has also been swallowed and is the reason that Ruto has kept venturing farther into Jabu-Jabu’s belly.

A lot of effort was put into the game’s little mysteries and giving subtle answers to players who are willing to look for them, such as finding the reason Dampé buried his Hookshot in Ocarina. Although Ruto’s path into Jabu-Jabu and the reason she is still there when Link finds her makes a lot of sense when looked at through the scope of her role as Jabu-Jabu’s attendant, another important aspect in Ruto’s journey inside Jabu-Jabu is that she’s the holder of the Zora’s Sapphire – or was, until it was eaten.

After visitors were no longer allowed to see Jabu-Jabu, Ruto continued her duties as his attendant and kept bringing him meals. It’s theorized that the spreading curse placed on Jabu-Jabu led to him swallowing Ruto during one of the times she was performing her duties. Since she had the Zora’s Sapphire with her, it’s possible that the parasite within Jabu-Jabu sensed it and that resulted in Ruto ending up in his belly. Link then needs to give Jabu-Jabu a fish, which is one of Ocarina of Time’s worst items to bottle up since this is the only real use for them in the game, and head inside Jabu-Jabu’s belly to find the missing princess.

Related: The Legend Of Zelda’s Most Useless Items For Link To Use

Instead of trying to escape on her own, Ruto delved deeper into Jabu-Jabu’s belly because she dropped the Zora’s Sapphire, losing it. She didn’t want help, preferring to find it on her own, but she ends up begrudgingly accepting Link’s help, having realized that she won’t be able to get it on her own with the accursed creatures roaming within. Though they get separated, Link defeats the parasitic source of the curse afflicting Jabu-Jabu: Barinade.

Despite many obstacles, Link receives the Zora’s Sapphire as a reward from Princess Ruto for rescuing her and curing Lord Jabu-Jabu. Since the Zora’s Sapphire acts as an engagement ring for the Zora, Ruto says that Link is now her fiancé. However, Ruto becomes the Sage who protects Ocarina of Time’s notoriously hated Water Temple, so she puts her engagement to Link on hold in order to fulfill her duties as a Sage. By the time she becomes a Sage, Ruto can devote her full attention to this role for she is no longer Lord Jabu-Jabu’s attendant, and he is nowhere to be found after Link’s time in the Sacred Realm.

Ruto can be annoying and is very fiesty when Link first meets her, but she has a strong sense of duty and shows that she’s willing to put aside her personal desires for the sake of the greater good. By being swallowed by Lord Jabu-Jabu, she ends up saving her patron deity from Ganondorf’s curse because Link enters and defeats its source. Ruto is barely seen in other Zelda games, but maybe it’s time for her to play a larger role in another entry in the franchise instead of only in Ocarina of Time.