Home Entertainment Zelda: Breath of the Wild The player Makes an interesting Discovery about... 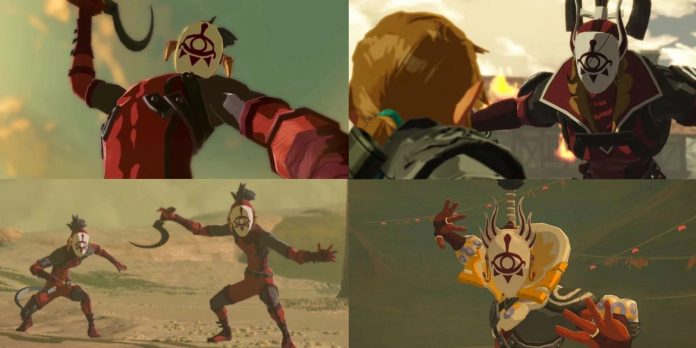 In The Legend of Zelda: Breath of the Wild, Link travels through the abandoned kingdom of Hyrule, trying to tame the corrupted Divine beasts and defeat the Scourge of Ganon. While Link is exploring, one quest in the Gerudo Wasteland leads him to the Yiga Clan, a band of marauders obsessed with killing Link and bringing the world back to chaos. As the player explores the world of Breath of the Wild, he may encounter seemingly innocent travelers seeking refuge from destruction, although they quickly discover that they are members of this elusive clan.

In certain places of the open world of Breath of the Wild, these travelers will appear, and after Link engages them in conversation, they will break their disguise and attack him. After killing them, they will drop a few rupees and a banana, hinting at the key to distracting the demons when Link later breaks into their territory. However, players may not find out about these personalities that they take forms that are eerily familiar.

As the user justookingfordragon discovered in the r/Breath_of_the_Wild subreddit, each traveler takes the form of a real NPC by name somewhere in the game world. Approaching the traveler who appears at Hebra Trailhead Lodge, the user discovered that each of the various disguises he assumes are “1:1 clones” of the named characters. The JustLookingFordragons post describes their process in detail and lists all the characters whose forms Yiga takes.

The user goes further, explaining that the unique followers of Yig, who pose as crying women, are created exclusively on the model of wandering female NPCs. They are also surprised by the two masked Yigas seen in the Urbosa video from the Ballad of Champions DLC, describing them as potentially “unique” as they don’t match any of the known wandering NPCs.

User _pe5e_ expands on this post by explaining that all the disguises that members of the Yiga clan take come from a pool of traveling non-player characters, but only from Hilian characters, since they never take the forms of Zora, Gerudo and Gorons. This means that 35 of the 43 wandering characters are “suitable for disguising themselves as a Yig-Infantryman.”

Reddit users rejoiced at this revelation, expressing relief that their paranoia about meeting the masked Yigas had finally diminished. They also praise the dedication of the Reddit user who spent so much time and effort on this discovery, as well as the developers for their attention to such small details that fans can hope to see in the sequel to Breath of the Wild, which will be released in 2023.

The Legend of Zelda: Breath of the Wild is currently exclusive to the Nintendo Switch and Wii U.