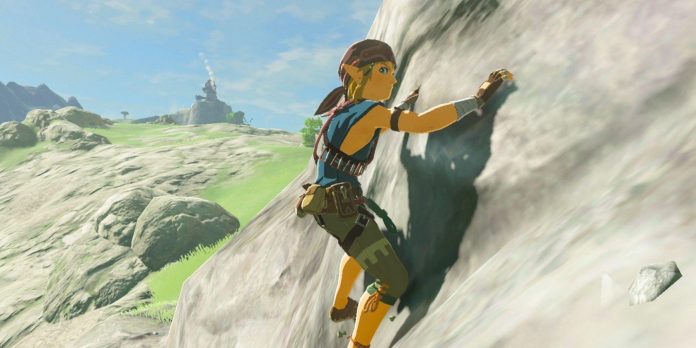 Players explore every nook and cranny that Hyrule has to offer, trying to get rare ingredients for crafting or find obscurely hidden Crusts. In this case, Reddit user coolestblue discovered the missing texture while climbing a mountain in The Legend of Zelda: Breath of the Wild, showing a strange, wall-like part of the rock in a short video clip.

Exploration is one of the favorite aspects of many third—person games, and The Legend of Zelda: Breath of the Wild doesn’t disappoint, giving players plenty of land to explore, even if that land isn’t always 100% there. At first, a video clip from coolestblue shows the player sliding along an ordinary rocky ledge on a mountainside, but after a moment they make a sharp turn to show the underside of the same outcrop, now completely empty. Then they bounce and jump towards the missing texture, demonstrating the fact that it merges with the rest of the mountain again. Sliding down so that the underside is visible again, coolestblue gives another look at the texture of a paper-thick mountain, and the middle is wide open to the sky.

I found the missing texture from botw

Random, missing textures and game crashes are not uncommon, especially in large open-world games, although often the risk of something breaking is reduced by increasing development time. The launch of The Legend of Zelda: Breath of the Wild was scheduled for 2015, which was postponed twice before the game was released in 2017. The sequel to Breath of the Wild has also been postponed, and Nintendo has asked fans to be patient with the delay. so the game can be not only playable, but also enjoyable.

Turning The Legend of Zelda: Breath of the Wild into an open-world game was a way to steer the franchise in a new direction while remaining faithful to the components that make the Zelda game solid, such as the use of puzzles and specific items. boss fights. This means that delaying Breath of the Wild 2 could be a good thing, giving Nintendo time to create another massive game with virtually no bugs.

Legend of Zelda: Breath of the Wild can be played on Wii U and Switch.