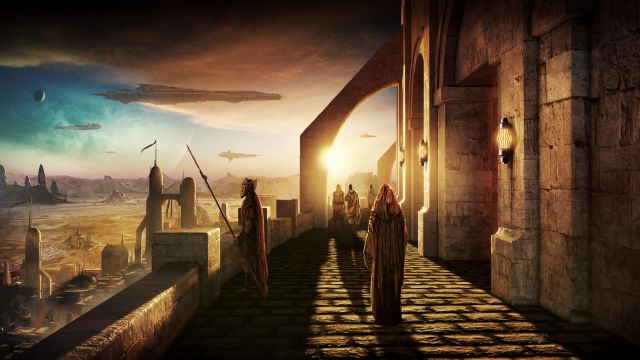 Rebel Moon: The film director shares new concept art from his upcoming Akira Kurosawa-influenced sci-fi film with an all-star cast. In the middle of last year it was confirmed that Rebel Moon, the next film by filmmaker Zack Snyder (300, Batman v Superman, Army of the Dead), arose from an idea that the director had years ago for a new Star Wars movie. After not coming to fruition, Snyder recovered a good part of his original script to shape his new project, a science fiction film strongly influenced by Akira Kurosawa. Now, the filmmaker shares new conceptual arts at the same time that a luxury cast has been completed with names like Ray Fisher or Charlie Hunnam, among others.

This has been confirmed by the Deadline medium, presenting the entire cast of Zack Snyder’s Rebel Moon; and it is that after confirming the name of Sofia Boutella in the leading role months ago, it has now emerged that names like Ray Fisher (Cyborg in Justice League), Charlie Hunnam (Sons of Anarchy, Pacific Rim), Djimon Hounsou (Captain Marvel, Shazam !, Aquaman), Jena Malone (Sucker Punch), Staz Nair, E. Duffy, Charlotte Maggi and South Korean actress Donna Bae.

For now, little else is known about Rebel Moon beyond a few words from the director: “I grew up a fan of Akira Kurosawa and Star Wars. It comes from my love of science fiction and great adventures. I hope it becomes a gigantic intellectual property and a universe to be able to build, ”Snyder admitted in 2021.

What we do have as a novelty are new conceptual arts of Rebel Moon and that serve to take a look at the universe that the director intends to capture on the small screen through Netflix. Production is expected to start in 2022, since for now there is no premiere window on the streaming platform.