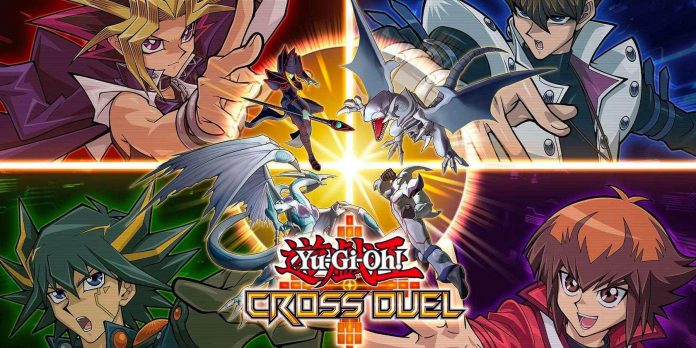 Since the release of the Japan-exclusive Yu-Gi-Oh! The Monster Capsule Breed and Battle game in 1998, a well-known card game franchise, has become almost synonymous with video games. There are several YGO video games modeled after both the physical collectible card game and the anime, with some taking notes from other games such as Dungeon Dice Monsters showcased during the show’s run. With the release of Yu-Gi-Oh Master Duel, and now with the launch of Yu-Gi-Oh Cross Duel worldwide, the momentum of YGO-based video games is not stopping.

Yu-Gi-Oh Cross Duel was launched in Canada, Hong Kong and the Netherlands, unfortunately, on the same day the news appeared that Kazuki Takahashi, Yu-Gi-Oh’s own creator, had passed away. As fans mourned the loss of such a wonderful artist and writer, those who played Cross Duel were comforted by the YGO video game, which includes everything the series represents. Cross Duel turned out to be the perfect way to pay homage to everything that makes Yu-Gi-Oh unique, new, but at the same time familiar in a way.

The Yu-Gi-Oh video game set that has enjoyed the most success with fans is the Yu-Gi-Oh Tag Force series. In this series, fans played their favorite moments of the Yu-Gi-Oh GX and 5Ds anime, and the Japan-only game focused on every episode up to Arc-V in one huge title. While several YGO games allow players to immerse themselves in their favorite TV show arcs, what made Tag Force titles special was the mechanics that allowed players to team up and make friends with many franchise characters by fighting them, interacting with them, and giving them gifts.

Fans loved this mechanic because it allowed players to get close to almost all the outstanding characters from the respective series, such as the main characters such as Jayden Yuki, and even villains such as Aporia. After noticeably missing these features from Yu-Gi-Oh games after 2015, Cross Duel marks their return as a major part of gameplay. The mobile game has a special tag duel mode in which players are friends with their favorite characters, and the partner chosen by fans gives comments in other game modes. As soon as it became known that Cross Duel returned such a favorite feature, many players immediately became interested in the game.

Every Yu-Gi-Oh anime is presented

Despite the fact that Tag Force games have existed for quite a long time, covering seven unique titles, they did not last forever. Yu-Gi-Oh Arc-V Tag Force Special marked the end of the series, as a result of which the last anime based on TCG was left without a Tag Force game that could be called its own. For fans of Yu-Gi-Oh VRAINS, this was quite tragic, as the themes of unexpected friendship that overcome difficulties in the virtual reality-inspired anime felt like they were well suited to the game mechanics of friendship.

Now that Cross Duel is taking notes from fans’ favorite PSP games, in every anime, from Yu-Gi-Oh Duel Monsters to VRAINS, the characters are presented with full voice acting. This means that those who longed for a Tag Force game that allowed players to interact with later additions to the series’ long list of characters, such as Yusaku “Playmaker” Fujiki, will finally be able to see this wish fulfilled in Cross Duel. Even Yu-Gi-Oh SEVENS has found its place in the new mobile game, despite the fact that SEVENS is more focused on the TCG spin-off Yu-Gi-Oh Rush Duel. Despite the fact that these two series already had video game releases, VRAINS “Legacy of the Duelist: The Evolution of Communication” was held back by several problems, due to which the fanatics of the series were quite unhappy with the way the sixth anime YGO was presented. So far, Cross Duel has left many VRAINS fans pretty satisfied after the entire run of the series went without a proper video game.

Although Yu-Gi-Oh has established itself as a card game franchise, this series has never been dedicated to card games. In the first seven volumes of the manga, the series was devoted to games in general, as Kazuki Takahashi came up with games that the characters could play when writing the series. They ranged from small, intriguing games that had instructions attached to them so that readers could play them themselves, to “punishment games” that Yami Yugi imposed on scammers. The first Yu-Gi-Oh anime, called the “Zero Season” by fans, demonstrated exactly this version of YGO.

Shortly after the Duel Monsters game was introduced, the card game eventually became the focus of attention due to how much it intrigued readers. Although Takahashi still created unique games for the series, there were few of them compared to the numerous card duels in the series. As Yu-Gi-Oh may have outgrown the experimental nature of its other games, Yu-Gi-Oh Cross Duel almost pays homage to this forgotten aspect of the series’ origin.

Fallout: New Vegas is the best impossible to play game