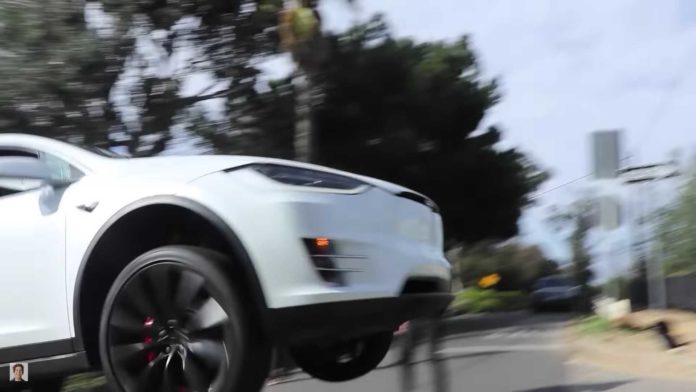 A YouTuber named David Dobrik has decided to fly on the steep streets of Los Angeles. Realizing this incredible event with Tesla Model X, YouTuber has survived this madness accidentally. Seeing the video in question, Elon Musk commented on Dobrik’s Twitter post.

With the widespread use of the Internet, online video platforms have gained great importance. Content producers upload videos that get more and more interesting to the platforms where they make huge money, and they want to be more popular with these videos. Now there is a similar incident, and a YouTuber named David Dobrik really “flew” with his Tesla model X.

Dobrik is one of the names that have long been popular on the YouTube platform. YouTuber, who often confronts subscribers with interesting and creative videos, has really exaggerated the work this time and did something incredible with Tesla Model X. Dobrik, who shot the video in Los Angeles, flew on one of the steep streets in the area with his vehicle. The moments were shared yesterday on Dobrik’s YouTube channel.

Before going into the details of our news, it is necessary to say that the images that we will share with you are very risky. Because this kind of situation is very dangerous for both traffic and human health. The video in question was accidentally circumvented, but in a similar situation you are very likely to crash.

The video of YouTuber Dobrik begins with two motorcycles taking off from a street with an extremely steep slope. Although it seems to be a coincidence, in the previously planned images, Dobrik talks with his friends on whether he can do such a thing. Then, what happens is, and Dobrik decides to fly just like motorcycles with the Tesla Model X.

The image you see above is a section of the video. In a few seconds after this image we shared, the Tesla Model X takes off completely. Model X makes a hard landing after this flight and these tension-filled moments are completed without any accident.

The incident was also seen by Tesla CEO Elon Musk. Dobrik shared another image besides the video he uploaded to YouTube on his Twitter account. Elon Musk just says “!” put the sign. Musk’s exclamation point was, of course, a warning that Dobrik’s move was wrong.

Huawei Watch GT 3 Unveiled With Up To 14 Days Battery