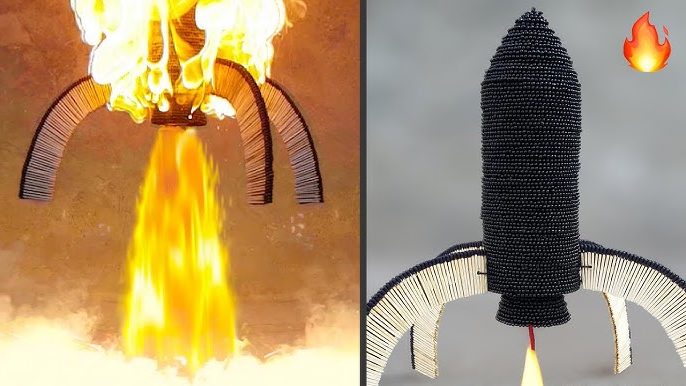 A YouTuber made a rocket using 1 million matches and cardboard. He then fired the rocket and shared the magnificent images that appeared.

A YouTube channel called Technical Tech Tube attracted attention with a rocket that lasted 750 hours, although it had only 4,000 followers. YouTuber made rockets and fired using 1 million matches. The rocket was designed to offer only a visual feast, and even though it could not climb into the sky, it managed to rise slightly from the ground.

YouTuber cut glue hundreds of thousands of matches for the construction of the rocket, and glue it to the circles in the form of circles. He then placed the cartons on top of each other, creating a combustion chamber for the rocket. He also used the top of the matches to form dust, using it as fuel for the rocket. The powder from the match completely filled with phosphorus inside the rocket.

The rocket that YouTuber made by giving his months disappeared within a few seconds after his firing. However, the slowed view of the rocket and the fire it produced was the scene of beautiful images. As you can imagine, this space rocket is far from taking us to the Moon … It is the place to say that it could not even resist gravity.

Moments when the rocket fired with 1 million matches:

Rihanna: Drake had a very difficult “I was a pawn” breakup!