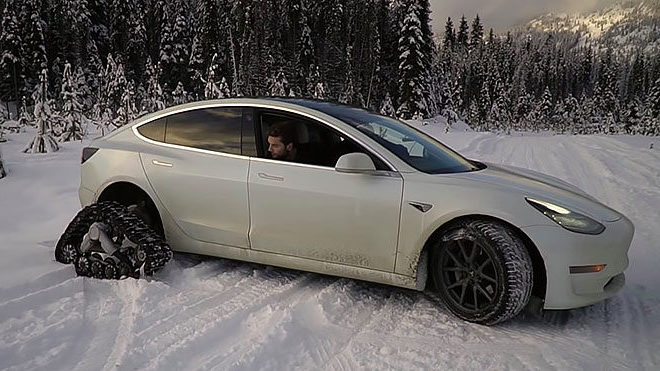 A Canadian YouTuber fitted a pair of snow pallets on Tesla Model 3, which he owned. The vehicle, which gained great functionality on the snowy road, turned into an “electric snowmobile” with the modification it gained.

Being a big car enthusiast, Micheal is signing interesting content on his YouTube channel lowlifeduramax. American YouTuber, who previously put Tesla Model 3 into a rope-pull race with the Chevrolet Duramax truck, installed a pair of snow pallets this time.

But Michael’s job was never easy. Because Model 3’s own weight was already over 1.5 tons. Despite this, YouTuber, determined to transform his vehicle into an “electric snowmobile”, received help from a company called Mullin Manufacturing to make this dream a bone.

Installing snow tracks on the rear wheels of Model 3, Mullin created a mounting system that will connect the tracks to the disc brakes. After the modifications on the vehicle were completed, Micheal took the wheel and put Model 3 to the rigorous test.

Model 3, which showed up on a snowmobile track in British Columbia in Canada, performed a wonderful performance despite the heavy snow. The only problem with the test was that the vehicle lost its traction in reverse gear. But Michael says that this problem can be solved with a few additions.

Stating that he was generally impressed by the performance of the vehicle, YouTuber stated that the radical modification did not harm Model 3 in terms of design or mechanics. The parts used for the modification of the Model 3 look similar to those used for trucks and SUVs. It is unknown how much money Canadian YouTuber got out of his pocket for this transaction.

When Will There Be Stock Of Graphics Cards In 2022? NVIDIA...