Home News Youth Made Action All Around the World for Climate 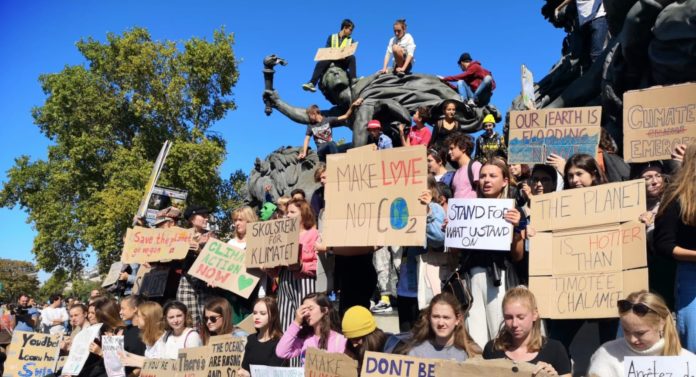 The Youth for Climate movement, which began with the call of Swedish young activist Greta Thunberg, launched an “international strike for climate” in around 150 countries around the world on Friday (September 20th). From Sydney to New York, from Istanbul to Paris, from Berlin to Bombay, in 150 countries around the world, young people went out on the streets to protest the climate policies of governments.

The largest participation in all the actions in France took place in the capital Paris. College and high school students who did not enter the class by striking in the afternoon, gathered in Nation Square. In France, 56 associations, unions and organizations gathered at the call of young people, accompanied by slogans and banners marched to Bercy Square. Teachers also joined the strike by supporting their students. 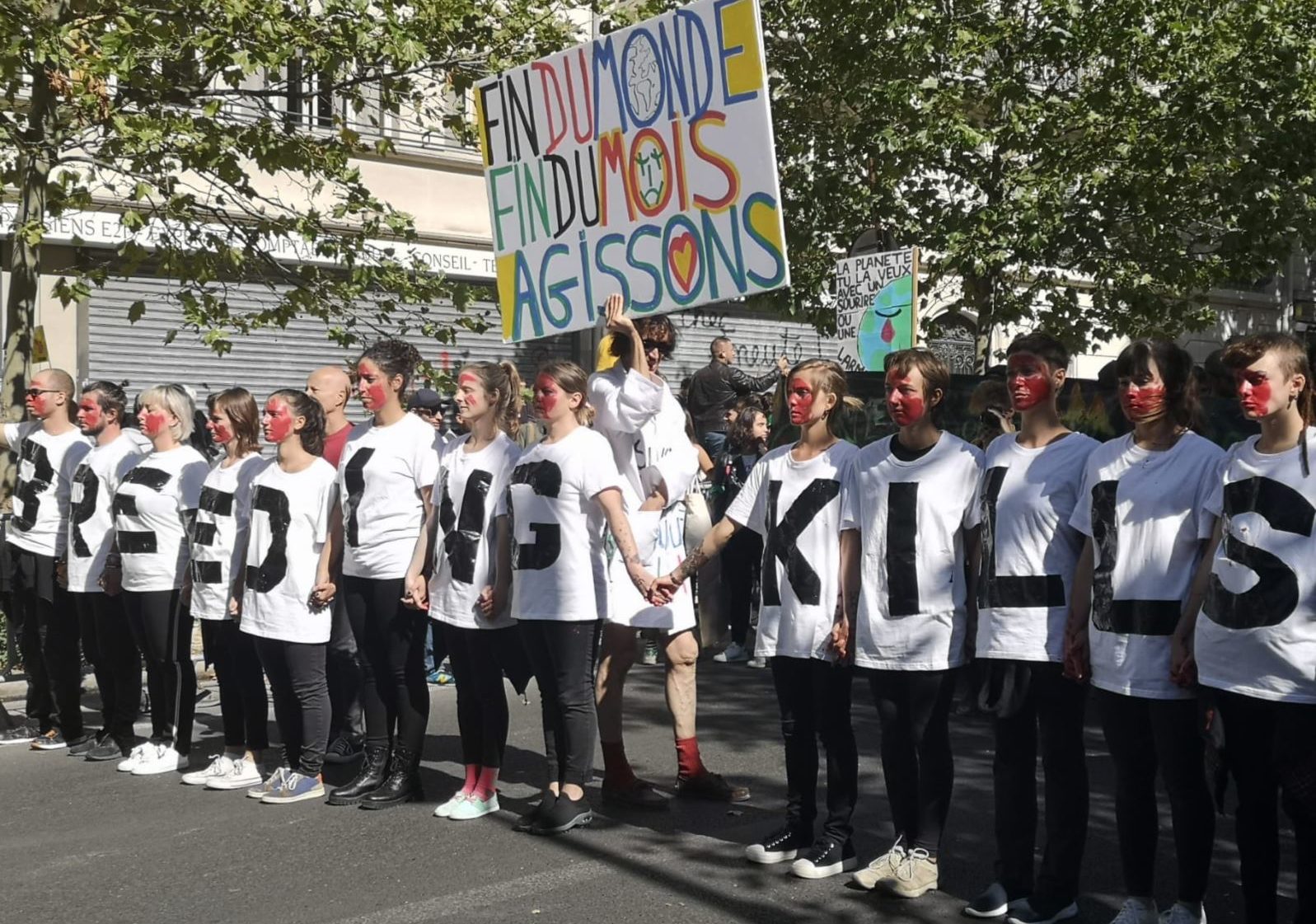 “The ocean level is rising, our anger is also”, “We are here today because you stole our future”, “Climate is warming, we are warming up” young people walking with the slogan “anti-human rights, environment and globalization, unions, left parties and the Green Party also supported. .

According to the figures given by the census company Occurrence, 9,400 young people participated in the action in Paris. Paris Mayor Anne Hidalgo also supported the action in a joint article with New York, Los Angeles and Copenhagen Mayors.

Young people announced on Friday, September 27th, that they will repeat their actions due to the UN General Assembly meeting. France, Strasbourg, Toulouse, Nantes, Rennes, Marseille, the young people who struck in the city, protested the government’s climate policies. 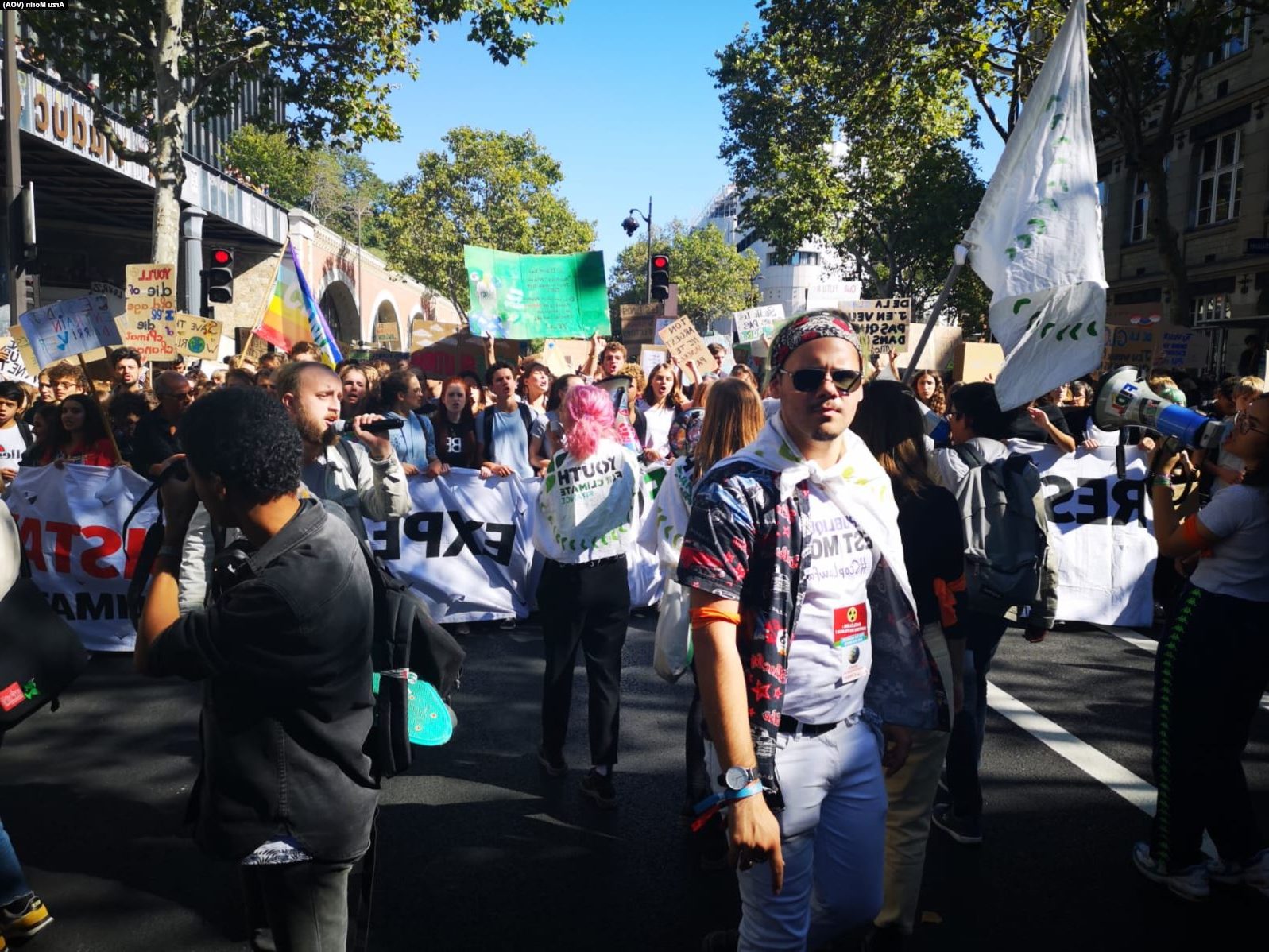 Youth For Climate’s French organization warned the government after two strikes organized on 15 March and 23 May, saying, “This is our third and last warning, and we will take more effective action from now on.”

Demonstrations will be held in France on Saturday to protest “the government’s climate policies” and to demand “social justice”, but not limited to young people. Throughout the country, climate action will be repeated with the participation of both Yellow Vests and citizens of all ages. To ensure security, 7,500 policemen will serve only in the capital, Paris.

Hundreds of thousands participated in Global Climate Strike in Germany

16-year-old Swedish environmental activist Greta Thunberg started under the leadership of “Fridays for Future” actions held within the scope of the global climate strike was intense participation from Germany.

A total of 575 shows and demonstrations took place in 400 cities including Frankfurt, Munich, Hamburg and Cologne, as well as the capital Berlin.

According to the number of organizers, at least 1 million 400 thousand people participated in the demonstrations. It was stated that the global strike was the biggest action held in Germany in recent years; The spokesmen for Fridays for Future claimed that only 200,000 people went to the streets in Berlin. 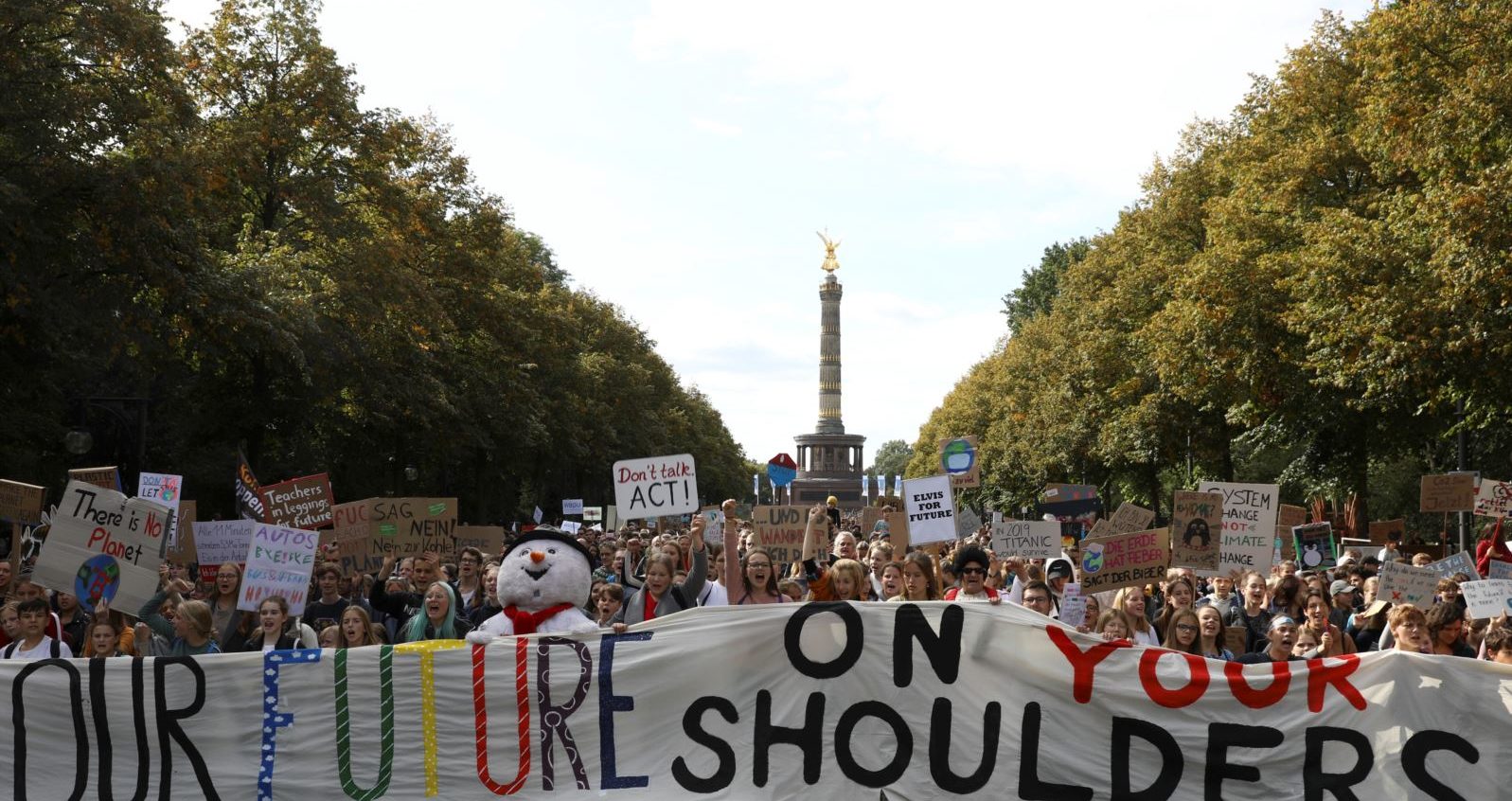 Unions, churches, non-governmental organizations and many parties supported the actions that started today and will continue in the coming days. Compared to previous Fridays for Future actions, not only students, but also adults, workers and public employees participated in the demonstrations. In a similar large-scale protest in March, around 40,000 people, mainly high school students, were on the street.

Participants demanded national and international binding regulations to reduce greenhouse gas emissions, the country should abandon coal energy by 2030 at the latest and a 100 percent renewable energy by 2034.

Some groups participating in pirate demonstrations organized parallel to the rallies organized a sit-in on the streets in order to block the traffic; the crowded groups of bicycle drivers caused the cars to go more slowly.

Among the total 70 measures, it is worth noting that 54 billion Euros will be allocated to the fight against climate change by 2023. The government declared the goal of reducing greenhouse gas emissions to 55 percent less than the 1990 level in 2030, and in this context defines the struggle against greenhouse gas and carbon dioxide production, which pollutes the environment, as the most important task and says that effective measures should be taken for this purpose.

Merkel: ‘We are behind our goals’ ’

Introducing the measures, Prime Minister Angela Merkel said that Germany is far behind its targets for climate protection and that it understands the public reaction. Stating that Greta Thunberg wants to take action as soon as possible on the basis of scientific data, Merkel said that the protection of the environment and climate is the ideological, not the interest of all humanity.

According to the planned measures, it is aimed to gradually increase the tax on gasoline, diesel, diesel and natural gas. In the first phase, an increase of 3 cents is planned in 2021, while the second increase is aimed at 9 to 15 cents per liter in 2026. Increasing the tax on air transport is also included in the package of measures. The increase of the ticket tax on domestic flights from January 1, 2020 is now undetermined, but train tickets are reduced by around 10 percent and passengers are encouraged to travel by plane. 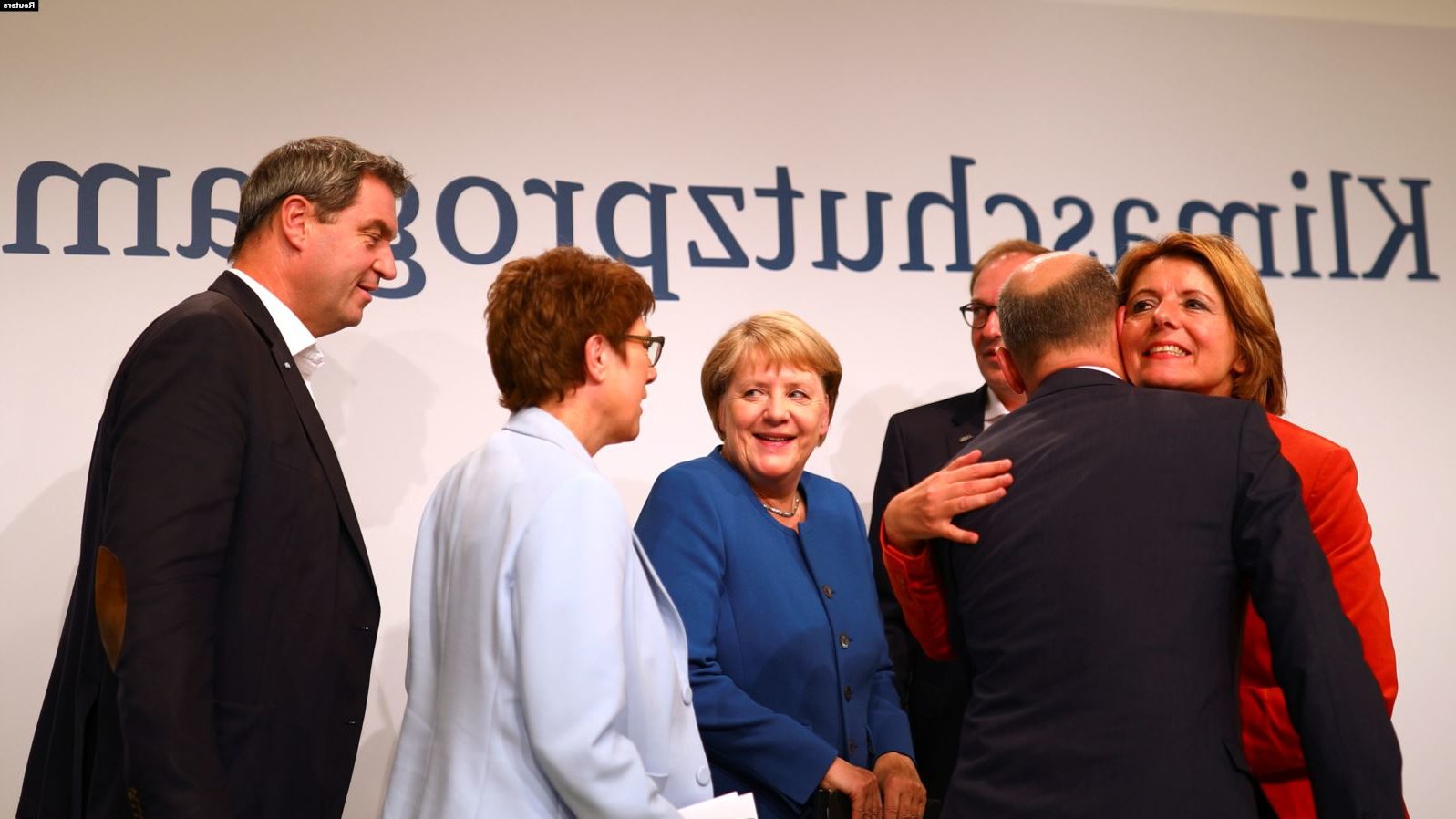 Among other measures, 2026 20dan diesel heating systems to be banned, the new system of air-conditioning is expected to give 40 percent incentives. For those who go by car from the suburbs to the workplace, a tax cut of 5 cents per km is foreseen as of 2021.

Environmental organizations and opposition parties, particularly the Greens, said the government’s measures were not sufficient to protect the climate, arguing that Merkel missed the chance to go down in history as ‘environmental prime minister..

Discussions on climate-related measures are expected to continue after the United Nations Climate Action Summit, which will be held in New York on September 23, and will be attended by Prime Minister Merkel.