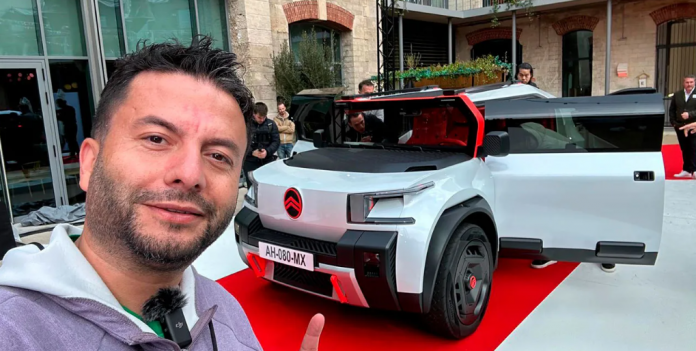 Citroen also presented the Oli concept car with a new logo at an event organized in Paris.

Citroen has unveiled its new logo on the concept model presented today. The French manufacturer, who presented his new conceptual model at an event in Paris, again managed to attract attention. After Citroen, Ami Oli attracts attention with its different design and the materials used in it.

Citroen has unveiled its new logo with the Oli concept

The Citroen Oli design presented at the event in Paris combines environmental friendliness and accessibility. It is quite obvious that the French manufacturer is working overtime to reduce the weight of the new conceptual model to a minimum. To do this, Citroen leaves all the minor elements in the car.

For example, the user’s own speakers for listening to music in this small car; smartphones will serve for navigation and other infotainment systems. Thus, with a decrease in the weight of the vehicle, its cost will also significantly decrease.

We see that the interior of the car is made in the style of minimalism. Car seats printed on a 3D printer, with the minimum possible detail in the front, also have advantages both in terms of cost and weight.

One of the most controversial details of the Citroen Oli was the cardboard used on the roof of the car. Although this situation has raised questions about safety, the tests claim that the material used is more durable than steel. In fact, we witnessed how a Citroen representative climbed onto the roof of the car during the action, checking the strength of the cardboard material on the ceiling.

On the other hand, the foam material on the sole is one of the remarkable details of the car. This material is also one of the ways that the company uses to reduce weight. It is claimed that the car, designed for four people, has a total weight of 1000 kg with batteries.

Let’s move on to the design of the car; A car that attracts attention with its angular lines generally looks like a small SUV. The loading space in the rear also reminded us of other large pickup truck models. The bright design of the car is complemented by specially designed wheels and matching Goodyear tires for a specific model.

Offering a power reserve of up to 400 kilometers with batteries with a capacity of 40 kWh, Citroen Oli proves that at the moment it is designed not only for urban use. Oli’s batteries can be increased from 20 to 80 percent in 23 minutes. The maximum speed of the car, which provides consumption of 10 kWh per 100 km, is stated as 110 km/h.

It is unknown whether the Citroen Oli will become a reality, but the path we have traveled gives us important details about the future. So, what do you think of the Citroen Oli, which is described as a young car? You can share your opinion with us in the comments section.

347 people died from Coronavirus in Italy