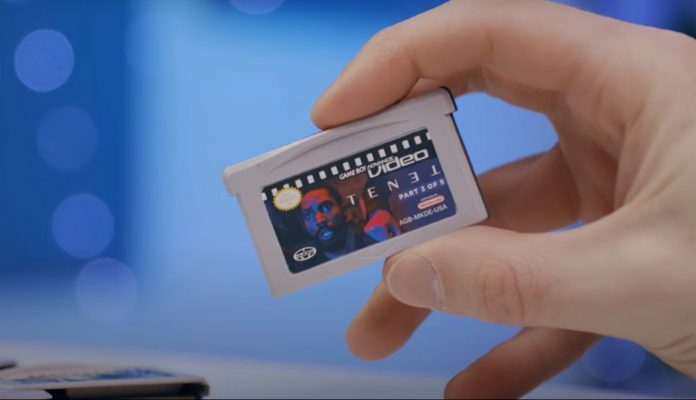 The movie Tenet by Christopher Nolan was transferred to the Game Boy Advance handheld console by an American YouTuber. Video, which became viral on social media platforms in a short time, became the center of attention due to the hard work of the content producer.

Tenet, which was delayed three times due to COVID-19, was finally released on August 26 last year. The production, which was the first major Hollywood movie to be released during the pandemic process, left its mark on the summer with its magnificent story. Although it did not achieve the success it wanted at the box office, the film, which was spread by word of mouth with the whisper newspaper, took its name among the legends in a short time. We haven’t seen Tenet on a digital streaming network yet. But the creative creator brought it into the 90s epic game console.

YouTuber named Bob Wulff interestingly packed the approximately 2 hours and 30 minutes long movie into this rather nostalgic machine. Game Boy Advance cartridges have a maximum capacity of half an hour on average. For this, we watch Wulff divide the film into five cartridges. In fact, the name, who does not want to come across with a dry cartridge, even designs a cartridge that does not look like stylish DVDs!

To touch on the technical part of the work, Wulff reduced the resolution values ​​of the Tenet film in order to do this. Bringing to 192 × 128 pixel quality, the production also compressed up to six frames per second. For those who don’t know, this figure corresponds to 24 frames per second in a standard movie.

As a result, it is the first time that Nolan’s spy-themed time travel movie has taken on such a form! Of course it would be ridiculous to compare this with the IMAX experience. However, what are your views on this YouTuber’s laborious work above? Don’t forget to share your ideas with us.

BigHit invites you to visit the HYBE Corporation facilities