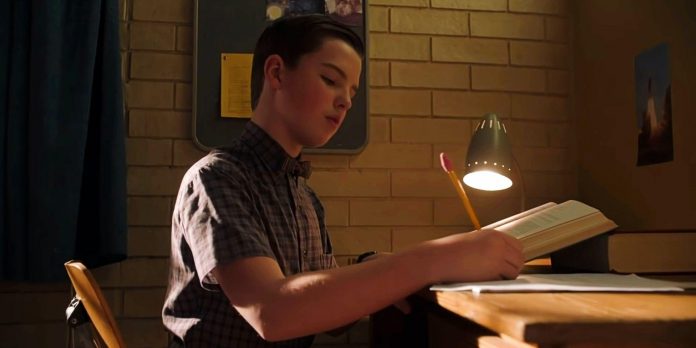 A new image of “Young Sheldon” from Season 6 shows the first look at an adult Sheldon Cooper. The premiere of the CBS sitcom continues after the fifth season, and two more seasons are already guaranteed. This means that viewers will learn more about the childhood of the socially maladjusted genius from “The Big Bang Theory” in Texas, including his developing relationship with the rest of his family.

Just two months before the premiere of the CBS sitcom will return with fresh episodes, filming of the 6th season of “Young Sheldon” has quietly begun. After the coronavirus pandemic disrupted the sitcom’s schedule over the past couple of years, the series returned to the regular season premiere schedule, and the 6th season of “Young Sheldon” is scheduled to begin at the end of September 2022. Much of what can be expected in the new year was created by the 5th season of “Young Sheldon”, especially with the arc of Georgie’s pregnancy and the crumbling marriage between George and Mary. As for Sheldon, the boy genius will continue his adventures in college and cope with his sometimes unique growth challenges.

Related: Images of the Young Sheldon S6 Hint that Missy Has Finally Learned Her Biggest Lesson

The sixth season of “Young Sheldon” is currently in production, and the first image of Sheldon Cooper appeared online thanks to the show’s producer Ainsley Rix. The picture was posted to her Instagram story and shows a more adult Sheldon at church with Missy and Mary. Take a look at the photo below:

Regan Revord previously shared an image that indicates that the Coopers will return to church in season 6 of “Young Sheldon,” but this is the first time some characters are shown for their upcoming return. Judging by Zoe Perry’s mask, it seems that this was done between breaks when Revord and Armitage were laughing at something. However, this image apparently makes Armitage look much bigger than last season. In this picture, he is significantly taller than his on-screen twin. Perhaps this is a sign that there will be a time jump between the seasons of the “Big Bang Theory” prequel. Otherwise, Young Sheldon simply wouldn’t have been able to attach much importance to it.

Since there is practically no context in this photo other than where the trinity is located, it is curious what exactly brought them back to the church. It’s worth remembering that the entire congregation and Pastor Jeff turned their backs on Mary and the Coopers in season 5 of “Young Sheldon” after news broke that Georgie unexpectedly became pregnant with Mandy. It is possible that, despite all this, Mary remains devoted to her church, which may increase the tension between her and George. The possible appearance of Rob’s youth pastor could further complicate the situation for Sheldon’s parents. As for Sheldon, the boy genius seems to have abandoned his more laid-back aesthetic, reminiscent of his outfit in The Big Bang Theory, and returned to a shirt and tie combo.