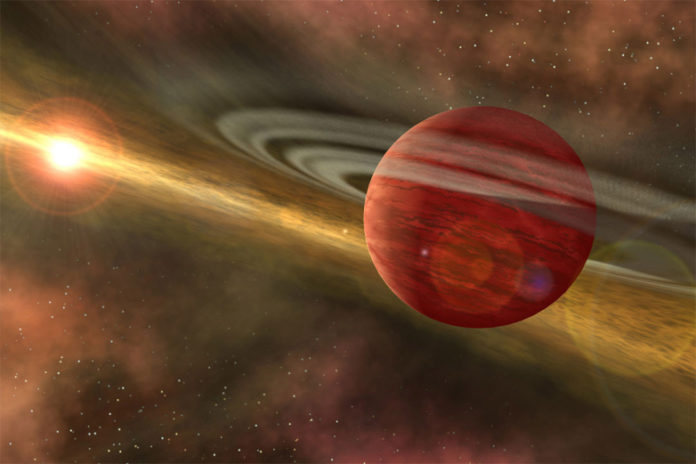 Astronomers have discovered a giant planet that is relatively close to our Earth and newly formed. This planet is 10 times the size of Jupiter. It is stated that the giant celestial body is only 5 million years old and is 330 years away from us.

Jupiter is known as the largest planet in our Solar System. This planet, at the same time, surpasses our Earth with its difference with Earth. Still, Jupiter cannot be said to be so impressive considering the large order of objects. Of course, Jupiter is known to be a big planet, but if the other gas giants of the galactic forest are considered on our side, it is a fact that the planet can be considered small.

Using data from the sky scans of the Gaia spacecraft, researchers discovered a gas giant large enough to embarrass Jupiter, not far from Earth. Moreover, this size is just a little bit more than Jupiter, 10 times exactly. This giant celestial body is only 330 light years from Earth.

The new discovery offers a rare opportunity to give astronomers the chance to observe the early years of a gas giant. The revolutions of this newborn giant planet around its young star and the beginning of life will be observed. Even now it is stated that the planet, which is 10 times larger than Jupiter, is still growing and will eventually become bigger.

The research team leader, Annie Dickson-Vandervelde, said in a statement that 2MASS 1155-7919 b is 10 times Jupiter, and perhaps they are looking at a baby celestial body that is still under construction. The scientist also noted that almost all of the planets previously discovered by the Kepler mission are ‘old’ planets.

Again, according to the astronomer, the fourth or fifth giant planet and theorists discovered so far away from star 2MASS 1155–7919 b find it difficult to explain how these planets were formed or why they are so far from their stars.

Germany and Britain broke records in solar energy production thanks to...

A Possible Symptom That Is Common In Corona Patients Appeared