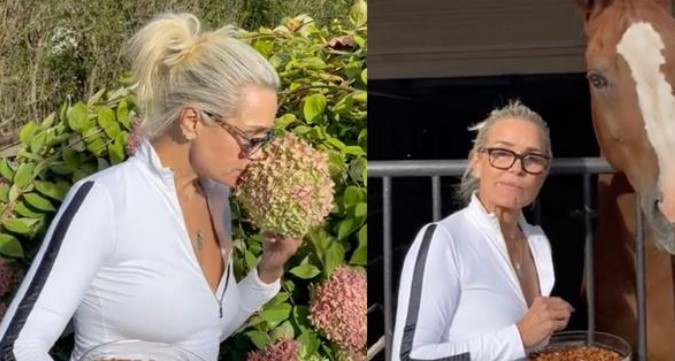 Bella and Gigi Hadid’s mother, Yolanda Hadid, responded to criticism of her upbringing with a TikTok video in which she poses with a plate of almonds in different places.

Yolanda Hadid, 58, is known for her participation in the reality show “The Real Housewives of Beverly Hills”, as well as being the mother of Bella and Gigi Hadid.

Yolanda has been criticized in the past after accusations that her daughters are “starving,” and one of the latest videos claiming this on TikTok has garnered more than 700,000 likes.

In one of the clips included in the video, Yolanda got a call from Gigi, and Gigi told her: “I feel very weak, I ate about half of the almonds.” Yolanda replies: “Take a couple of almonds and chew them well.”

Yolanda has now responded to the backlash against her with her own TikTok video. She uploaded a selection of clips of herself eating almonds from a large bowl in various places, and added the caption: “#worstmomever #almonds.”

The video was tagged by TikTok with a warning that reads, “Participating in this action may cause you or other people to get hurt.”

Commentators were divided about the video. One of the users wrote: “Chew this half well!” with reference to Yolanda’s earlier comments.

While some called it “funny”, others disagreed with this opinion, and another user wrote: “No, because if my mom made a joke on TikTok about comments that are a blueprint for my eating disorder-related brain, I would literally wreak havoc.”

The clip has gained 20,000 likes and more than 200,000 views, and it continues to cause controversy as the post spreads on social media.