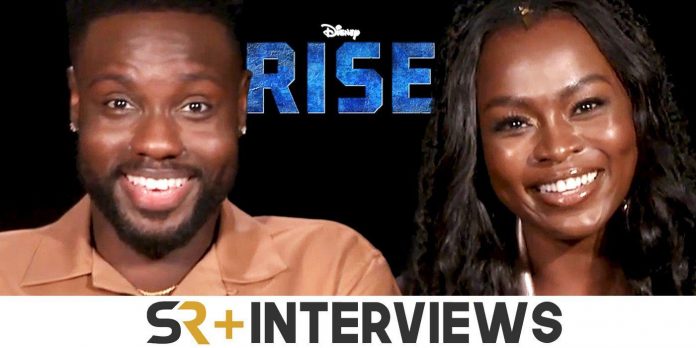 Rather than focusing soley on NBA player Giannis Antetokounmpo (Uche Agada), Disney’s Rise tells the story of the entire Antetokounmpo family. Charles (Dayo Okeniyi, The Hunger Games) and Veronica (Yetide Badaki, American Gods, This Is Us) travel from Nigeria to Greece, hoping to find a better life for their future family. Their effort to obtain citizenship for themselves and their children proves to be an ongoing challenge, but the couple refuses to give up hope.

Despite the threat of deportation, Charles and Veronica allow Giannis and his brother, Thanasis (Ral Agada), to be in the public eye when they join a local basketball team. While they’re faced with plenty of obstacles in their path, the Antetokounmpos’ love for their family and belief in their children opens a world of opportunities.

Yetide Badaki and Dayo Okeniyi chat with Screen Rant about their onscreen dynamic in Rise and the importance of sharing the Antetokounmpos’ story.

Screen Rant: What can you each tell me about your character? What did this role entail?

Yetide Badaki: I get to play Veronica Antetokounmpo. I like to call her, “The Mother of Kings.” She is—when we meet her in the story—with Charles, making a treacherous journey in order to procure a better future for her family. And the wonderful thing about this character is, apart from the similarities we share—being Nigerian being immigrants—the wonderful thing about the story is Veronica’s unwavering faith and belief in the dreams that they all hold for this family. And that was one of the things that resonated immediately with me, as a Nigerian immigrant, about this story.

Dayo Okeniyi: I play Charles Antetokounmpo, and—I’m going to steal this one from you—“Father of Kings.” Charles is, unfortunately, no longer with us. But getting a chance to play a character who raised, honestly, some incredible men along with his wife, was an honor. And I really wanted to play this character and do it justice and do his legacy justice. Without a doubt, this is one of those jobs of a lifetime. It’s an immigrant story. A beautiful story about a family: it’s a story anybody can get behind.

Whether you’re from Mars, or whether you’re from Nigeria or China or wherever, anybody can get behind the story about this family just seeking a better life, you know? And grasping at a dream. And, in our case, making it into the NBA. So it was more than sports for them, it was more than just basketball. It was their lifeline, it was their lifeblood. So getting the chance to play a father who was able to—along with his wife—keep this family together and have them have tenacity and fortitude…to be at the core of the family was amazing. He’s a great character to play.

Screen Rant: One thing that I really enjoyed about the film was the relationship between Veronica and Charles. You can tell that it’s very real—there’s a real, genuine love between them—and they just want their family to be safe and happy. They would do anything to protect their children. What was it like to bring this dynamic to life? Especially, considering, that this is a real one.

Dayo Okeniyi: It was terrible. Can’t stand her.

Yetide Badaki: [laughs] This guy? What are you talking about?

Dayo Okeniyi: Clearly our acting was so amazing that I was able to fool you guys into believing that I could tolerate this human being. No—it was amazing!

Yetide Badaki: Okay, but we’ve got to start from the fact that we actually did our chemistry read remotely. So—I think you were in Toronto?

Dayo Okeniyi: I was in Toronto, yes.

Yetide Badaki: And I was in Palm Desert. And we had to gauge our chemistry off of Zoom. Apparently, it was just palpable. [laughs]

Yetide Badaki: It jumped off the screen! But it was things like—I think it’s because we’re both theater geeks. We’re both film geeks. I think we bonded on those things and I still remember from that audition we both wore fake wedding rings, you know? We were in simpatico immediately. And then another favorite moment of mine is in between scenes shooting in Greece when we start singing Hamilton, you know? We could go into a whole thing, how much time do you have? But yeah. That also speaks to—apart from Dayo being a wonderful human being—we all know this. And talented—

Dayo Okeniyi: I see you got the cash.

Yetide Badaki: I did. But it also speaks to our incredible team leader, Akin Omotoso, our director. He just created this wonderful environment on set and created this large family out in Greece. And I’m glad—I’m guessing we’re both glad—it showed up on the screen.

Screen Rant: It absolutely does show up on the screen. It really feels like it is one thing that ties the whole movie together—this bond and this family that you managed to create. You’ve both been in other projects before—this is not the first production that you’ve done. How was this different from the other things you’ve been in? What was it like being on this set and telling a true story?

Dayo Okeniyi: First of all, I’m Nigerian. I’m an immigrant myself. I moved to America when I was fifteen years old with my family, so I one hundred percent can relate to that story. Once I knew they were telling the story of Giannis, who I’ve known for a while—I’m also a basketball fan, I was like, “Woah, this is something I could really be a part of and this would be a project that I could really lend myself and my life experiences to.”

And it was amazing on set because—in terms of just the detail of having a lot of Nigerians heading all the different departments—from wardrobe to, of course, Akin, our fearless leader I’m also sure was of Nigerian descent, as well. There was just the attention to detail. The attention to specificity down to the food, you know? It’s like…we have Nigerian food in a Disney movie. That’s crazy.

Yetide Badaki: And I had to be a professional taste tester.

Dayo Okeniyi: I had to be! I just had to taste everything to make sure—the audience will never taste the food, but we would know. So it was just amazing. Nigerians are stereotypically known for being larger-than-life people. We can be quite ostentatious. We’re a very small country in West Africa that no one ever really pays attention to. So, to have a spotlight shone on us and our people like this is amazing.

Nigerians—we’re excited to see ourselves represented on the big screen like that. So to be in a production where you could just be the fullness of yourself, in terms of your culture—I’ve actually never played a Nigerian before and I’m Nigerian. This is the first time I’ve played a Nigerian in anything. That was so amazing. That was so amazing because you could just be the full length and breadth of yourself.

Yetide Badaki: Yeah, we talk about when this was shot, as well. We were in the middle of the pandemic and it really put everything into sharp focus. Every decision, every time you stepped out of your door you were making a choice in regards to, at that time, your safety. We weren’t sure what was going on. But this script was one that immediately resonated. That immediately called to the storyteller within about the need to share this story on a universal level.

There’s still a lot going on in the world with undocumented migration and not in just any one country, it’s happening across the globe. There’s a lot going on in regard to displaced people, whether within their countries or across different borders. It’s a deeply important topic—something that’s very necessary to start having conversations about. So, for me, being a part of that, being able to tell the story as a Nigerian, as well, but also be a part of this larger universal conversation and to be able to lean into the idea of dreaming and belief and faith…that was one I could not say no to.

Based on the true story of three young Nigerian-Greek brothers, Giannis, Thanasis and Kostas Antetokounmpo, who emigrate to the United States and rise to fame and success within the National Basketball Association.

Check out our other interview with Rise stars Uche Agada & Ral Agada.

Esposito believes that “Star Wars” turned out to be a better...