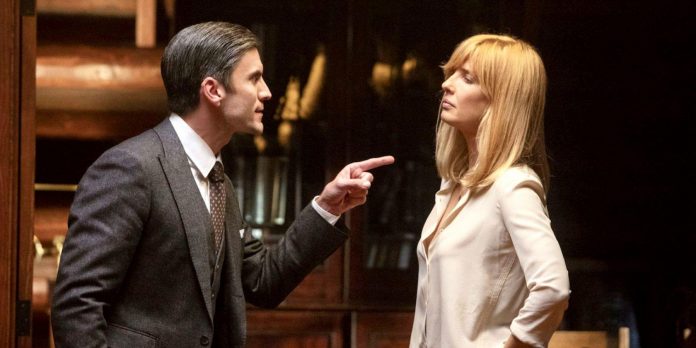 Yellowstone star Kelly Reilly recently explained the new dynamic between Beth and Jamie Dutton in season 5. Reilly plays Beth in the western, a loyal but emotionally unstable daughter John Dutton (Kevin Costner), the patriarch of the family that owns the largest adjacent territory. a ranch in Montana. As the ranch is constantly threatened by external forces and his family is slowly being torn apart from within, John struggles to keep ownership of the ranch by trying to keep them together.

Throughout seasons 1-4 of Yellowstone, Beth had a strained relationship with her brother Jamie (Wes Bentley). In previous episodes, it was revealed that they had both witnessed their mother’s fatal accident. The event initially brought Beth and her brother closer to such an extent that she trusted Jamie to help her get an abortion. However, after Jamie hid from Beth that she would not be able to have children as a result of the operation, they have had disagreements since then. After it became known that Jamie’s biological father, Garrett Randall (Will Patton), was behind the assassination attempt on the Duttons, any residual trust Beth had in her brother was lost. In recent episodes of Yellowstone, Beth forced Jamie to kill Garrett, having evidence against him.

In a recent interview with TV Insider, Reilly talked about the dynamics of Beth and Jamie in the fifth season of “Yellowstone.” The pair work together to save Dutton’s ranch. The actor stressed that the actions of the brothers and sisters will be “for the family.” Read her comments below:

“There’s a bit of an early dynamic coming back to the show when they have to work together. [Beth and John] are using Jamie to deal with things they wouldn’t be able to do. They need him to work for the family. … It’s like working for the mafia.”

Throughout Yellowstone, John was a respected member of the community and used his position as the Montana livestock commissioner to help his family’s ranch succeed and keep his employees out of trouble. He encouraged his children to pursue careers that would benefit the Duttons in the first place. Since both Beth and Jamie were chosen as John’s lawyers, Reilly’s comments hint that John’s compromised position will lead to Jamie’s skills being used again. This will almost certainly lead to him working with his sister to help the family and the ranch in a difficult moment.

One of the most attractive aspects of Yellowstone is the tightrope of trust on which members of the Dutton family must balance in order to stay together as a unit. The main goal of John’s life is to ensure a harmonious life for his family on his territory. Due to distrust, revelations about adoption and death, John’s children left his side and became rivals of each other. However, thanks to the sheer will and machinations of his daughter, Jamie will apparently be back in action when the 5th season of Yellowstone is released on November 13.

Who are the Bumblebee actors and characters?