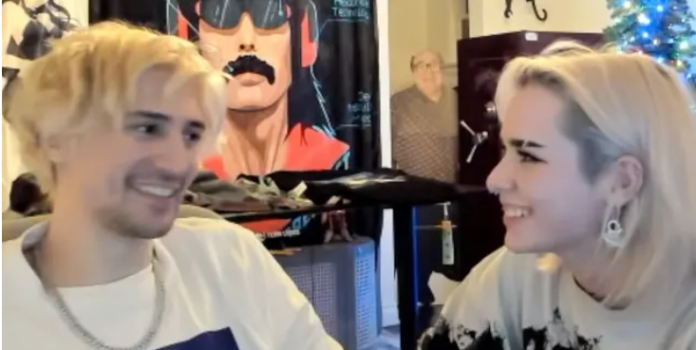 Canadian Twitch star xQc and British streamer NYXXII made their relationship public on their Twitch stream on November 1, just days after xQc denied rumors that he and his former adept are back together.

While there has been some speculation about the pair, they both made it clear that they are more than just friends when NYYXXII appeared on their stream on November 1.

On October 31, xQc was embroiled in some kind of drama with his former longtime partner, Adept, after she showed up at his house early in the morning. The pair seem to be on good terms, although the Adept also hinted that she is actually the owner of the McLaren xQc supercar, which angered many of his fans.

If you’re an xQc fan who doesn’t know, NYYXXII is an English streamer with over 300,000 subscribers on Twitch who first chatted with xQc (at least publicly) on a podcast/dating show along with Adin Ross and Kai Senat.

As soon as she appeared on Felix’s last broadcast, the fans guessed that there was something between them and started spamming “W Rizz” – a phrase to popularize the girl on Kai Senat’s stream.

The couple talked for a long time about the latest xQc thread before giving the chat what they wanted.

Fans are generally happy for xQc, who has abandoned his previous relationship despite the drama surrounding them.

But many also noted the uncanny similarity between the two of them — almost identical hairstyles, some joked that xQc “kissed the mirror.”

After she left the room, xQc joked: “I have a grindset. I heard a Future song in which he says “don’t chase a bitch” before quickly making sure NYYXXI is out of earshot.

10 Comforting Role-playing games that are more about travel