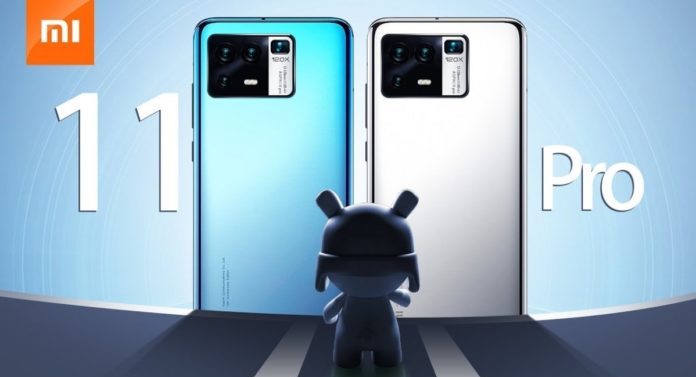 Xiaomi Mi 11 became official in the past week, but the Pro version of the phone was not introduced. The company, which seems pleased with the attention of the Mi 11 as soon as it goes on sale, is expected to introduce the Mi 11 Pro in the first quarter of 2021. A post on Weibo gives some information about the Mi 11 Pro. In the post, Mi 11 Pro is seen in blue and silver color options.

In the visual, it is noteworthy that the camera island of the Mi 11 Pro is different from that of the Mi 11. There are four cameras on the back of the Mi 11 Pro. It is stated that one of them is a periscope zoom camera. The phrase “120x” indicates that the digital zoom capacity of the Mi 11 Pro will not be below the Mi 10 Ultra.

It is stated that the 108 megapixel resolution sensor will be the main camera in the system. It is said that the system, which also includes an ultra wide-angle camera and a periscope camera, can also have a tele camera capable of 2x or 3x zoom.

It is not possible to see the front panel of the phone in the leak. However, according to rumors, the Xiaomi Mi 11 Pro will have the same screen features as the standard Mi 11. The 6.81-inch screen is expected to have a resolution of 3200 x 1440 pixels, 120 Hz refresh rate, 480 Hz touch sampling rate and 1500 nits maximum brightness. At the heart of the phone will be the Qualcomm Snapdragon 888 processor.

Plastic Name Given To A Newly Discovered Sea Creature