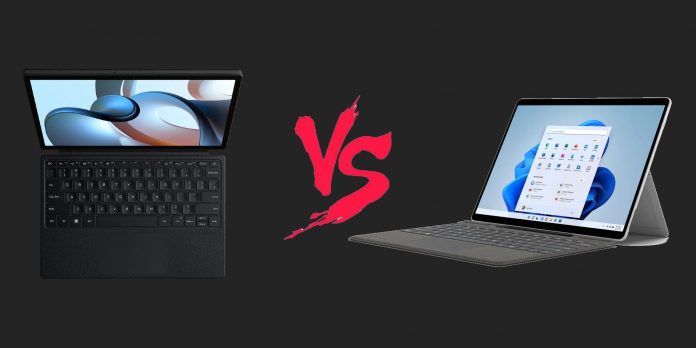 The Book S 12.4 is Xiaomi’s first Windows tablet powered by an ARM processor, and while its specs look good on paper, are they good enough to compete with Microsoft’s Surface Pro X? Since the Windows-on-ARM project was announced many years ago, all devices launched under this program run on Qualcomm chips. However, in November 2021, MediaTek announced that it intends to produce chips for Windows, as well as for Chromebooks.

Xiaomi and Microsoft have chosen different designs for their tablets. Although both are made of metal, they are easy to distinguish from each other. The Surface Pro X has an aspect ratio of 3:2, which makes it look more like a square. It also has a built-in stand that supports the tablet when it is on a flat surface. In contrast, the Xiaomi Book S has an aspect ratio of 16:10, which gives it a rectangular shape. Unfortunately, it does not have a stand, which means that it needs to be held or put on the surface. Xiaomi offers the Book S in dark gray, while the Surface Pro X is available in platinum and matte black.

The Surface Pro X is equipped with a 13-inch (2880 ×1920) PixelSense display, and thanks to the 3:2 aspect ratio, it is not as wide as the Xiaomi Book S 12.4 and its smaller 12.35-inch (2560 ×1600) display. . Those who want a tablet exclusively for work, and especially those who are often engaged in programming or editing/creating documents, will find the 3:2 aspect ratio of the Surface Pro X ideal. However, the Xiaomi Book S will be enough for those who want a device for editing images and videos or for streaming shows and movies. The two devices have a 5-megapixel front-facing camera with 1080p recording support, although only the Surface Pro X supports logging into Windows Hello with a face. On the back of the Book S is a 13-megapixel camera, and the Surface Pro X has a 10—megapixel sensor.

The Xiaomi tablet is equipped with a Snapdragon 8cx Gen 2 chipset and is available in one configuration with 8 GB of RAM and 256 GB of memory. Despite the fact that its processor has a higher clock speed than the Microsoft SQ1, it is not as powerful as the Microsoft SQ 2 in the 2020 Surface Pro X model. In addition, Microsoft supplies the SQ 1 version with 8 GB of RAM and 128 GB./256 GB of memory, while the SQ 2 variant has 16 GB of RAM and 256 GB or 512 GB of memory. The Surface Pro X has two USB-C ports, a Surface Connect port for power and a nano-SIM (for the LTE option). On the contrary, the Xiaomi tablet has one USB-C port for charging and output to the display. It also has a microSD card slot for memory expansion and an audio jack — two features missing from the Microsoft tablet. Again, the SSD on the Surface Pro X can be easily upgraded.

As for battery life, Microsoft is also leading the way with the Surface Pro X offering up to 15 hours of use. However, Xiaomi Book S 12.4 is not far behind with a claimed battery life of 13.4 hours. Like Microsoft, the Book S comes with a charger in a box. It’s also a 65W USB-C GaN charger, unlike the Surface Connect Surface Pro X power adapter. Two tablets have a removable keyboard and a Bluetooth stylus, which must be purchased separately. Xiaomi charges 699 euros (~$737) for the Book S 12.4, 99 euros for the SmartPen stylus and 149 euros for the backlit keyboard cover. The Surface Pro X costs $699 for a basic model with a SQ 1 chip, 8 GB of RAM and 128 GB of memory. Those who want an LTE variant with the same configuration will have to pay $999.

The more powerful version of SQ 2 costs from $1,299 and has 16 GB of RAM and 256 GB of memory. The price rises to $1,499 for the LTE variant and reaches $1,649 for the LTE model with a 512 GB SSD. The Surface Pro keyboard case is available for $99, and the Slim Pen 2 stylus is available for $129. There is also a $179 Surface Pro Signature keyboard with a Slim Pen 2 storage slot. In addition to this, the Surface Pen retails for $46.99, which makes it a cheaper stylus. Compared to the Surface Pro X SQ1 model, Xiaomi Book S 12.4 offers more for the price. In addition, although the Surface Pro X SQ2 version is more powerful, the Xiaomi tablet is still a cheaper alternative, offering sufficient performance with half the RAM. Unfortunately, Xiaomi’s Windows tablet is currently available only in Europe, which makes it inaccessible to residents of other regions.

Welcome to Platteville: The Evolution of Moriah’s Style in photos