Analyst XForceGlobal explained why the Bitcoin price will not rise to $ 20,000 in the first quarter of next year. The analyst said that news of the rise seen in Bitcoin this year will not directly raise the market in 2021.

Bitcoin analyst named XForceGlobal shared an analysis on TradingView. In his analysis, he said that the Bitcoin price should not be expected to reach $ 20,000 in the first quarter of 2021. XForceGlobal cited the low interest in Bitcoin compared to the data in 2017/2018 in the light of Google Trends data in 2020 as the reason for its claim.

In the news shared by Yashu Gola on Newsbtc, it was noted that the price of Bitcoin rose due to the news flows that raised Bitcoin, such as the coronavirus pandemic, US incentive package announcements and PayPal news, but in light of analyst XforceGlobal’s statements, this rise did not give enough comment for the next year.

Expressing that a healthy bull market is seen first, XForceGlobal said that his comment on Bitcoin is about the unhealthy bull rally. The analyst commented on the Bitcoin price with the cup and handle formation. 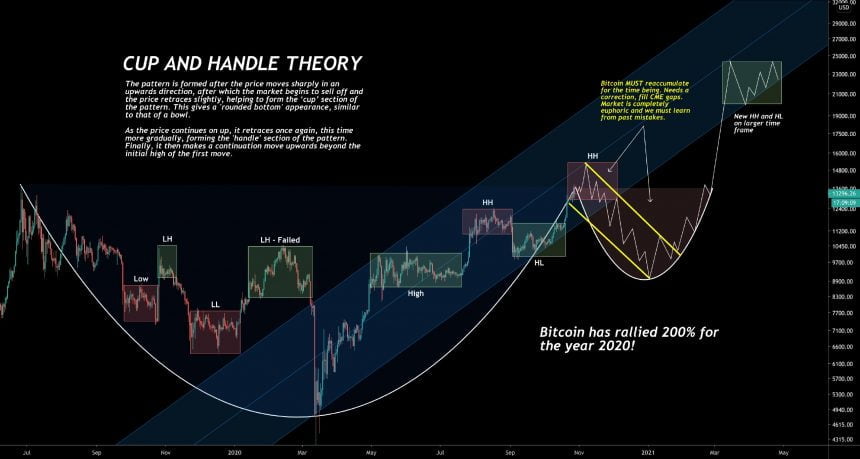 The analyst announced that we currently do not have the Bitcoin search volume seen in 2018, according to data from Google Trends. However, noting the magnitude of the impact of the US Dollar index (DXY) on the markets, he said that the index is strongly correlated with Bitcoin. The analyst showed the relationship between the index and Bitcoin, which plays a key role in understanding Bitcoin price activity, in the chart below:

Why is cup and handle formation important?

A cup and handle pattern describes the price moving slightly downward as a financial asset moves up sharply and sales begin in the market. This part forms the cup shape. The handle part occurs when gradual withdrawals are seen while the price continues upward. The result is an increase in price. According to the analyst, if there is a break above the pattern that this pattern revealed, the Bitcoin price could rise slowly and gradually.

MAMAMOO’s Wheein celebrates her birthday with all her fans love