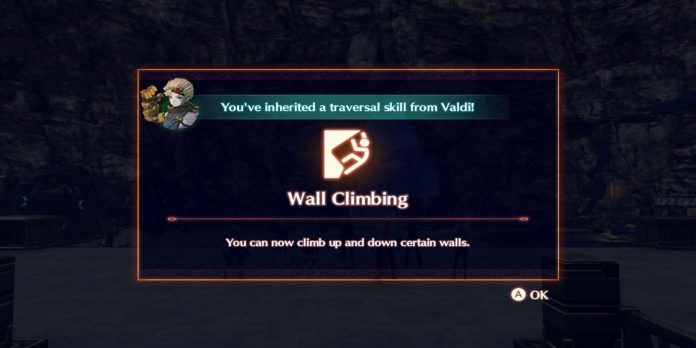 In Xenoblade Chronicles 3, players can unlock four different movement skills that will help them explore new areas of Aionios. These skills are climbing walls, sliding on a rope, walking on scree and neutralizing hazards. This guide will show players how to unlock the wall climbing skill so they can climb these purple vines scattered all over the world.

The good news about the wall crawling skill is that it unlocks as part of the main story of Xenoblade Chronicles 3, so players can’t miss it. With the skill, players will be able to access parts of the map marked with yellow pickaxe icons, which can lead to unexplored areas and rare loot.

How to unlock the wall climbing skill in Xenoblade Chronicles 3

In Chapter 3 of Xenoblade Chronicles 3, players will eventually meet with a builder Levnis from Colony 30 named Valdi. They will be able to recruit him and unlock the skill of bypassing the walls by completing his hero quest “Good Right Hand”.

Players must travel to three nearby areas to collect the Levnis exoskeleton, Levnis self-loading device and Levnis auxiliary processor. Three items will appear on the map so players can follow them, so getting them for Valdi won’t take long.

Players must continue to follow the quest steps until the Flaming Clock of Colony 30 is destroyed, freeing the outpost and freeing the people from the ongoing war between Keves and Agnus.

The heroic quest will finally end, and players will receive 1160 XP, 1410 Gold, 10 SP and, most importantly, the opportunity to climb purple vines inherited from Valdi himself.

Now whenever players see these yellow pickaxe icons in the world, they can easily climb them, regardless of which character is currently the leader of the group.

Valdi will join the group as a new Hero as soon as the quest comes to an end, and he is a great healer to have on the battlefield. Being a military medic, Valdi can heal the members of the group with the help of his Arts, which can be useful in a difficult battle with the boss in the story.

Xenoblade Chronicles 3 has already been released for the Nintendo Switch.