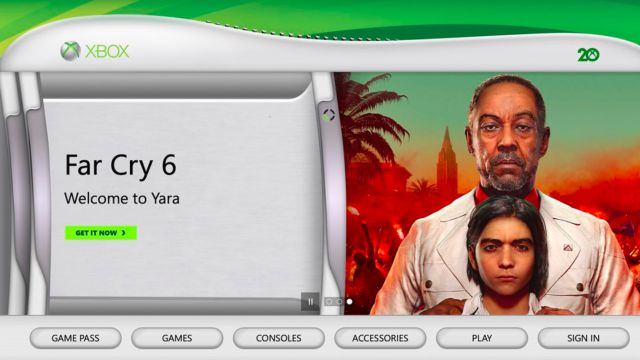 The first Xbox turns 20 on November 15 and Microsoft has begun to celebrate with several new features and surprises on its website. On November 15, 2021, it will be 20 years since the world met the first Xbox and its launch games, among which there were already jewels that would soon become established, such as Halo: Combat Evolved and Project Gotham Racing. It is a distinguished date that Microsoft wants to celebrate with a good number of tributes, winks and celebrations, including a total (and temporary) overhaul of the brand’s website. During these days, Xbox.com will look just like the legendary Xbox 360 dashboard did, the famous tabbed interface that we visited so many times between 2005 and 2013.

But the 20th anniversary of Xbox has materialized in more ways, such as in a special edition of the current controller. It has been designed in a translucent green and black that allows you to see the silver details of the interior and pays tribute to the original Xbox. Its colors have also been inherited by the Xbox 20th anniversary stereo headsets, or by the numerous t-shirts, hats and mugs of the event that have reached the web store. To this should be added the appearance of a hashtag for Twitter that has its own emoji (# Xbox20), an avatar and a dynamic theme for owners of Xbox Series X / S, or several wallpapers for the computer that you can download from here.