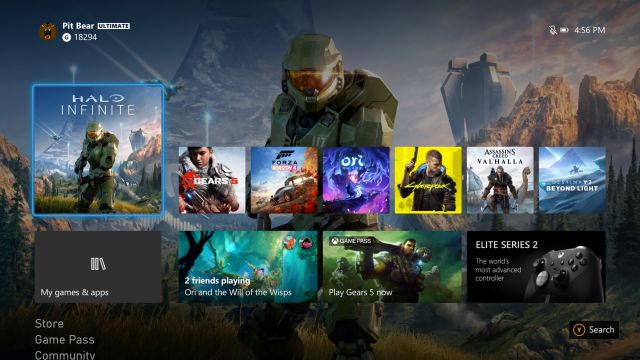 To date, Xbox Series X main menu and interface contents such as Guide, Home, and UI pop-ups have been displayed in native 1080p resolution; so that when starting a video game in 4K resolution, the console had to make that change in the video output that many of you will have identified during these first months.

Although the reason for this delay has not transpired, the community welcomes the change, since an increase in resolution up to 4K in Ultra HD televisions significantly facilitates the legibility of the texts and the sharpness of the images on the screen.

All in all, Microsoft is expected to release the update for all Xbox Series X players in the near future. Regarding the Xbox Series S, the entry-level model of Microsoft’s current generation, there will be no change: the native resolution of the console is 1080p.

While Xbox Game Studios continues to work on the future projects announced (and pending to be revealed) that we will play throughout this generation, Xbox Game Pass has prepared an extensive lineup of both first and third party titles that will be progressively added to the service of here in December.

In this article you can see that roadmap in full. It should be noted, however, the presence of names such as Halo Infinite (date to be confirmed; end of 2021) or Forza Horizon 5, the flagship of the season for a console that is beginning to receive heavyweights in its library.

Xbox will hold a special conference at Gamescom 2021 this August 24 at 7:00 p.m. (CEST), an event where they will show “in depth” the next games they have in progress.

The Superman movie reboot with J.J. Abrams as producer