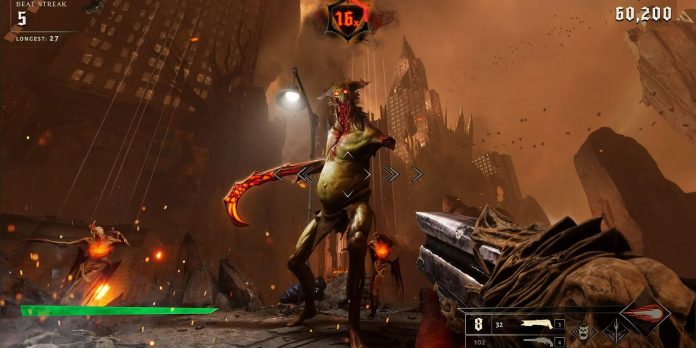 Despite the fact that this is a relatively niche genre, rhythm-based video games have been around for a long time. Most people agree that Parappa The Rapper, a PS1 game originally released in Japan in 1996, was the first true rhythm game of its kind. Since then, gamers have enjoyed games like the Guitar Hero series, as well as the VR game Beat Saber, which allows players to hone their time and skills, as well as burn calories. The upcoming Metal: Hellsinger game from developer The Outsiders aims to combine this rhythm-based gameplay with traditional FPS mechanics and adds a lot of heavy metal music for good measure.

First announced at the Summer of Gaming event in 2020, Metal: Hellsinger at first glance looks like a musical version of Doom. After the soft reboot of Doom in 2016, the long-standing FPS franchise gained a new audience, and Doom and its sequel Doom Eternal received high critical acclaim. Metal: Hellsinger wants to use the same template with environments and enemies that would look like at home in a Doom game, but with a key difference. Rhythmic gameplay and heavy metal music have been added to the game, which will reward players who can shoot to the beat. Metal: Hellsinger will also be available on Xbox Game Pass as soon as it is released later this month.

Metal: Hellsinger promises to be an exciting experience

The basic idea of the game is that players will make their way through hellish arenas, destroying demons of all shapes and sizes using an assortment of powerful weapons. While heavy metal is constantly playing in the background, the player must try to rhythmically synchronize their beats with the music playing. Successful completion of this will result in the addition of higher score multipliers and, more importantly, additional damage. Technically, Metal: Hellsinger is not the first game combining rhythmic gameplay with FPS battles. Bullets Per Minute, which was released for PC back in 2020 and then for consoles a little later, used the same plan and a similar setup, relying on procedurally generated dungeons to keep players occupied.

While the similarities between the two games are huge, Metal: Hellsinger aims to stand out by increasing everything that Bullets Per Minute did well, and interestingly, it also seems to be going down a path more focused on the plot rather than the style of Metroidvania. arenas. The player’s mission is to go through hell and overthrow the “Red Judge”, but no other details about this elusive character are reported. Given the campaign narrated by video game industry veteran Troy Baker, known for his wide range of voice acting, including voicing the main character Joel Miller in The Last of Us and Sam Drake in Uncharted 4, the game certainly looks more focused on something resembling a coherent narrative. compared to such as Bullets Per Minute.

The title will be the debut game of The Outsider, and the studio, of course, did not risk choosing something that could be classified as a very unusual option. In addition to the adrenaline, fast and furious firefight, Metal: Hellsinger also boasts talented vocalists. At the moment, the line-up includes Serge Tankian from System of a Down, Randy Blythe from Lamb of God, Alyssa White-Gluz from Arch Enemy, Matt Heafy from Trivium and others.

Everything that players have seen in Metal: Hellsinger so far has been promising, and fans of the FPS genre, as well as heavy metal, have reason to be excited. The fact that the game will be available at launch for Xbox Game Pass subscribers is the cherry on the cake and is another example of how Microsoft is adding exciting Day One games to its hugely popular subscription service.