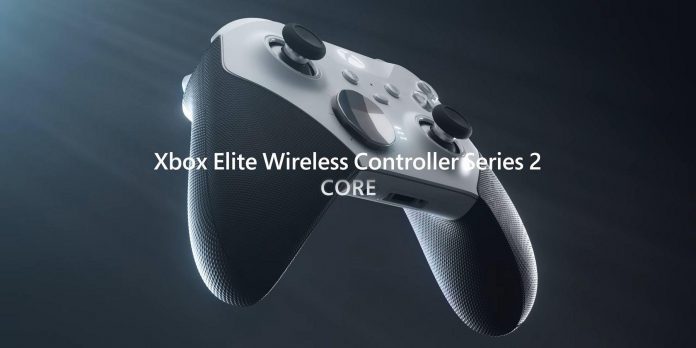 Microsoft has just released a new Xbox Elite Core controller, but some fans are having problems with the device. The Elite Core controller is an alternative version of the Elite Series 2, which aims to form a middle ground between top—end and standard controllers. It is available at a lower price of $129.99, but does not have all the advantages of Series 2 controllers.

The Elite Core controller has the features available in the Elite Series 2, but users will have to pay extra for the purchase of a separate package of components. The Core version has a rubberized grip, shorter trigger locks and adjustable tension sticks, as well as an impressive battery life of up to 40 hours. However, it does not come with removable parts such as a replaceable crosspiece and sticks. Now it looks like some players are having problems with Elite Core controllers.

Posts in the Xbox Series X subreddit show that some gamers are facing quality control issues with their new Elite Core controllers. A user named TH_Rz shared photos of his damaged controller, as it looks like someone tried to open it with an object. Xbox gamers in the same post report other problems, such as the lack of inputs on the right bumper and incorrect registration of other button presses.

A player named DrunkTractorDriver claims that one of his buttons had a double-click problem, and although they managed to replace it, the new controller had the same problem. Other users also share the problems they have encountered when using Elite controllers of both series, and fans recommend them to try third-party devices.

Perhaps the most important evidence comes from the user DamiK030, who posted a short video about the problem with the Y button on his Elite Core controller. In one of the comments, DamiK030 mentions that Elite controllers are great when they work, and they would like to have one that works as intended. In one of the comments, the player claims that he went through four Elite controllers, all had the same problem with the right bumper.

The new Elite Series 2 Core: “We hear you loud and clear,” they said! The same problems with the face buttons as the last 3 years! from XboxSeriesX

Many fans agree that standard Xbox controllers don’t have such quality control issues, so it’s a pity that the Elite series still has defects. Sony recently announced its own version of a professional controller called DualSense Edge, and it will be interesting to see if it suffers from any widespread issues like Elite controllers.