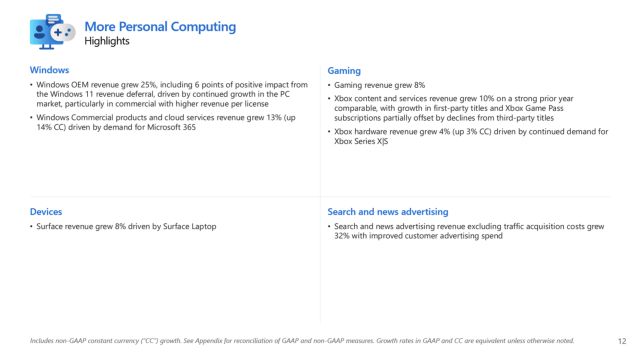 Xbox: Microsoft confirms the great state of form of the company’s gaming ecosystem, which grows by 8% compared to the previous year. Green shoots. Microsoft presented this Wednesday the financial results corresponding to the second quarter of fiscal year 2022 (Q2/FY2022), a period in which the North American firm has registered revenues of 51.7 billion dollars (20% more than a year ago) and some profits of 18,800 million dollars, a growth of 21% compared to last year. Regarding Xbox, the gaming division of the Redmond firm, we are talking about a year of real records.

There is only good news for Xbox this quarter. The team led by Phil Spencer, Microsoft Gaming, registers 8% more during this quarter compared to the same period last year (period from October 1 to December 31). While revenue from services and content has grown by 10% thanks to two main pillars: first-party video games and recurring revenue from Xbox Game Pass subscriptions.

Although billing through direct sales of third-party titles is falling -no percentages have been disclosed in the document-, Microsoft has managed to placate that fall with very positive figures in both first party works and, above all, its star service.

Finally, it should be said that revenue from the sale of Xbox consoles (everything related to hardware) has increased by 4% compared to last year. That data is justified by the unprecedented demand for Xbox Series S and Xbox Series X consoles, whose supply is well below supplies despite the positive index. Xbox Series sales are estimated to be around 12 million units (Niko Partners); a fact not confirmed by official sources.