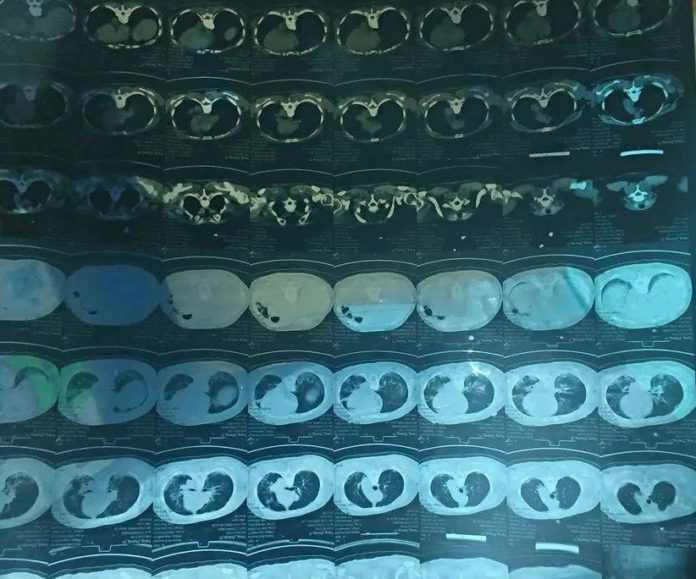 The new type of corona virus, which has not yet been found to have an effective treatment method, continues to spread throughout the world. An x-ray image that shows up today reveals how her infection has destroyed the lungs.

The x-ray images you will see soon belong to a Chinese woman named Yang Zhongyi, 53, who is suspected of being infected with the corona virus. Showing the symptoms of the infection for the past two weeks, Zhongyi went to four different hospitals in Wuhan, but could not be examined due to density.

The Chinese woman, who was able to X-ray as a result of her sons’ intense efforts, faced a bitter reality. In the x-ray film below, you can see the 53-year-old Zhongyi’s lungs that have been destroyed by the virus. Doctors state that the new type of corona virus, which has killed more than 100 people, has also been infected by the unfortunate woman.

Lung x-ray of woman thought to have corona virus
China is establishing two more hospitals in Wuhan, the epicenter of the outbreak. The mysterious virus, known as 2019-nCoV, was first described as the cause of death of a 61-year-old man in Wuhan on January 10. The first cases were linked to people working or visiting a seafood market; however, experts suspect that the virus was first transmitted from wild animals such as snakes, badgers, and rats.

It is stated that the new type of corona virus is not as strong as the SARS that caused the deaths of hundreds of people in 2003, but it could become more lethal or more contagious with potential mutations. According to the World Health Organization (WHO), 2019-nCoV shows typical cold symptoms such as runny nose, cough, sore throat and fever. The infection primarily targets the lungs and causes inflammation. The virus, which causes Acute Respiratory Distress Syndrome (ARDS) in a short time, makes it impossible for the person to be infected to breathe.

Chinese officials say there are 2,798 confirmed cases so far, but experts estimate that this number is more than 4,000. According to official data, 106 people have lost their lives to date. Countries with reported cases of corona virus outside of China include Thailand, France, Australia, Japan, Malaysia, Nepal, South Korea, Canada and the United States (USA).