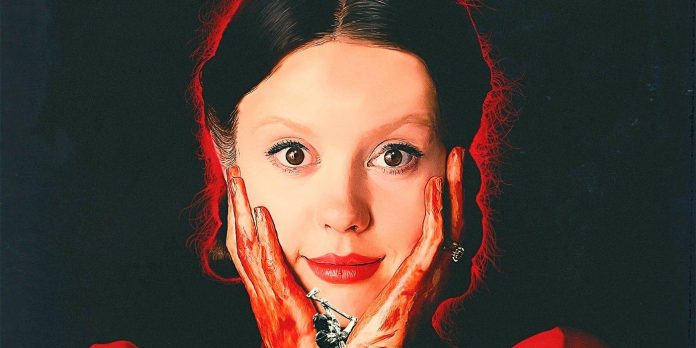 The official poster of the film “Pearl”, a prequel to the slasher, horror hit X, was presented. The X story follows a group of adult filmmakers who set up a shoot on a farm in Texas. As night falls, they are killed one by one by an envious elderly couple. Mia Goth starred in X as a young aspiring actress Maxine and an aging killer beauty Pearl. The double image of Goth evoked sympathy for Pearl, which is unlikely for a slasher antagonist. The prequel takes place in 1918, more than 60 years before the events of X.

On the eve of the online release of the trailer for “Pearls”, A24 presented the official poster of the film. The poster depicts a young Pearl looking directly at the audience with bloodied hands. Pearl wields his infamous axe, the blood of his victims drains into the title. The slogan of the film promises to be “A story of extraordinary origin.”

When the first premiere of X took place in early 2022, West announced that he had already finished filming in The Pearl. Production of the prequel began shortly after West finished filming X. In addition to reprising her role, Goth co-wrote the script with West. The trailer for Pearl was included in a post-credits scene exclusive to the theatrical release of X. However, it was not included in the release of video on Demand X. The official Pearl trailer will debut online tomorrow.