Home Sport WWE superstar Cody Rhodes has spoken about His Recovery from Injury, and... 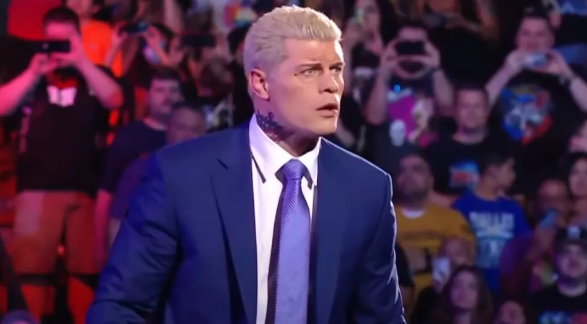 WWE fans may be involved in the mystery of the White Rabbit right now, but that doesn’t mean there aren’t other things they’re not thinking about or excited about. Many are still waiting for the return of Cody Rhodes after his epic match against Seth Rollins, in which Rhodes tore his rib cage, and it seems that the latest news on this front is positive. Rhodes has provided an update on his injury, and anyone hoping to see him return should be hopeful.

Cody Rhodes was about to get into the car when he was stopped by representatives of TMZ Sports and asked a little how things were going with his injury. Rhodes stated that his recovery is in full swing, but he is not ready to return to Monday Night Raw yet. When asked for some details about when he would be seen in the wrestling ring again, Rhodes said the following about his doctors and his potential return:

”They haven’t really given me [a return date] because they know I’m stupid and I’d try to test it. I got in my mind where I want to be, and I think a lot of fans have in their mind where I’d like to be, and that’s hopefully where it’s at. … What happens next, hopefully, and what we do, this is all speculative and up in the air. Hopefully, it’s a run people will remember and I gotta be healthy for it.”

It seems that Cody Rhodes is hinting that he hopes to return around the same time that fans would like it, that is, right before the official start of the WrestleMania season. In particular, there is a lot of speculation that even if Rhodes is cleared earlier, he probably won’t return until the Battle Royale, where he will appear during the men’s competition as a surprise participant.
If he returns during the Men’s Royal Rumble and wins, he will have the opportunity to fight for any title he chooses at WrestleMania. Since he left AEW for WWE, this star has made it clear that he hopes to get the biggest championship title of the latter, which his father and legendary wrestler Dusty Rhodes never managed to do.
Winning the Royal Rumble would also be a great way to get Cody Rhodes’ story back on track, given that he has been out for a while being treated for a chest injury. Of course, as he mentioned above, this injury may not heal in time for him to return in January, so in the end it all comes down to timing. Of course, another factor is whether WWE wants to pull the trigger on Rhodes, given that he has something else in the works and has signed a lot of talent lately.

Let’s hope that the “Prince of Professional Wrestling” will not get lost in this mix and will get a chance to continue his amazing storyline. However, it is difficult to say what the exact thinking of the wrestler is after the injury, especially considering that Triple H replaced Vince McMahon after his departure. We can only wait and see and hopefully get a nice surprise at the upcoming WWE event if it gets cleared sooner.

Monday Night Raw airs in the USA on Mondays at 20:00. MEAT. Cody Rhodes probably won’t be showing up anytime soon, but anyone with a premium Peacock subscription can stream some of his most iconic matches.