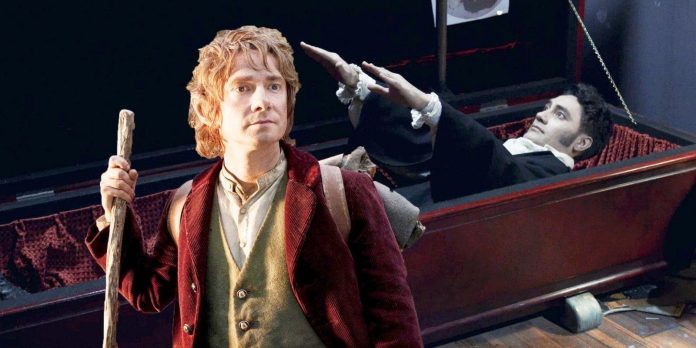 Taika Waititi said that his documentary about vampires, What We Do in the Shadows, has an amazing connection with Peter Jackson’s “The Hobbit” trilogy. The Hobbit films were Jackson’s big-budget follow-up to his hugely successful The Lord of the Rings films. The trilogy, consisting of “An Unexpected Journey”, “The Desolation of Smaug” and “The Battle of the Five Armies”, was significantly less well received by critics than LOTR, but still collected $ 2.94 billion. This was partly due to the fact that in the trilogy, despite the fact that the action took place in the times preceding LOTR, several original characters were still able to appear, including Ian McKellen’s Gandalf, Orlando Bloom’s Legolas and Hugo Weaving’s Elrond.

What we do in the shadows, despite the fact that it is also a New Zealand production, is much more like a sleeping hit. The 2014 film, which was co-written with Waititi and Jemaine Clement, and also starred, is a satirical look at vampire roommates, shot with a budget of about $1.6 million. The film grossed a reasonable $7 million worldwide, but it became a success thanks to a word-of-mouth campaign after its initial screening in theaters, hitting many “best” lists for both horror films and comedy projects of the decade. By 2019, he had become famous enough to spawn an adaptation of the FX television series, also titled What We Do in the Shadows, which is currently being prepared for season 4.

Related: The Best Horror Movies Of The Decade

Waititi appeared on the Late Show with Stephen Colbert this week to discuss his upcoming MCU project “Thor: Love and Thunder,” which hits theaters July 8. Colbert is a well-known passionate fan of The Lord of the Rings (he even had a cameo in The Despair of Smaug), and he couldn’t resist asking the Kiwi director about his relationship with Jackson. This caused an amazing story when Waititi said that the house in “What We Do in the Shadows” was built from “disassembled, broken green screens” from “The Hobbit”. Read his full story below:

“When I did What We Do in the Shadows… We didn’t have much money to make this movie, and “The Hobbit” had just finished. And then the production designer comes out – dude, I don’t know if I should tell this – okay, but I will… Our production designer brought his team to the Hobbit studio in the dead of night and stole all the dismantled, broken green screens, took all the wood, and we built a house. And the house in what we do in the Shade is built from a green Hobbit screen… I’ve never talked about it with Peter Jackson. I do not know if he knows. I like to tell this story at parties, but I do not know if he really knows.”

Of course, it’s been quite a while since Waititi had to work at such a low level of production. With “What We Do in the Shadows” and his subsequent film “Hunting Wild People”, the director was able to play in the sandbox with a large budget, creating MCU blockbusters such as “Thor: Ragnarok” and “Thor: Love and Thunder”, as well as directing the “Star Wars” project, which is currently has no name. Even his most recent low-budget project, Jojo Rabbit, was loud enough to win Waititi an Academy Award for Best Adapted Screenplay.

However, Waititi clearly still enjoys the mischievous nature of his early projects, such as What We Do in The Shadows. Of course, it would be interesting to hear how Jackson would react to this story about how “The Hobbit” helped bring this new classic comedy to life. Jackson was once also a brash young New Zealand director, shooting horror comedies such as Dead Alive and Bad Taste before he was drafted into big-budget Hollywood. Given this, he can only praise Waititi’s cleverness.