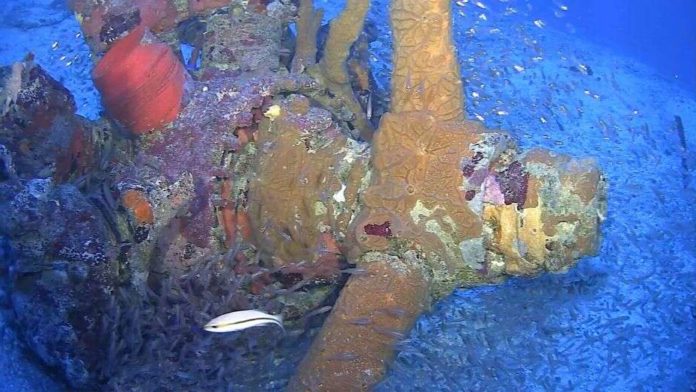 The debris of three U.S. bombers, shot down by Japanese forces in 1944, was reached. The wreckage is located at the bottom of a lagoon in Micronesia, while the corpses of the seven-person crew are thought to be in the wreckage.

The wreckage of three US bombers, which were dropped by Japanese forces during World War II, was reached 76 years later. A torpedo bomber with two dive bombers was shot down during a major military operation called ‘Hailstone Operation’ launched by the United States in February 1944 towards the Truk Lagoon.

The wreckage deep in a lagoon in Micronesia, north of Papua New Guinea, is thought to contain the bodies of 7 American soldiers. The wreck was found by an initiative called Project Recover, which aims to search and find American soldiers who were lost during World War II with the help of new technologies.

US victory against one of Japan’s most important naval bases:
Truk Lagoon was considered one of Japan’s most powerful naval bases in the Pacific during the war. In Operation Hailstone, which was seen as a victory for the USA, over 200 Japanese aircraft and nearly 50 commercial ships were destroyed within 2 days, while the US side lost 30 aircraft.

Scripps Institute of Oceanology specialists from the University of California University of Delaware worked together to locate the debris of crashed aircraft. Between April 2018 and December 2019, exploratory research was carried out 4 times in the lagoon. While the research in the water lasted 50 days, a total area of ​​70 square kilometers under the sea was scanned.

During the survey, the edge-scan marine radar and underwater drones were operated 30 to 65 meters below the water level to detect aircraft debris. Underwater archaeologist Andrew Pietruszka announced that the reports were combined for the evaluation of the American government, after the archaeological research in the collision field ended last December. At the end of this process, it will be decided whether to take action for the return of the wages of the 7 American soldiers who are thought to be in the wreckage.

Project Recover started its operations in 2016 after it was created in 2012 in partnership with private and public institutions. Partners of the initiative include Delaware University, Scripps Oceanology Institute and BentProp Project.

The effect of exercise against coronavirus has been proven