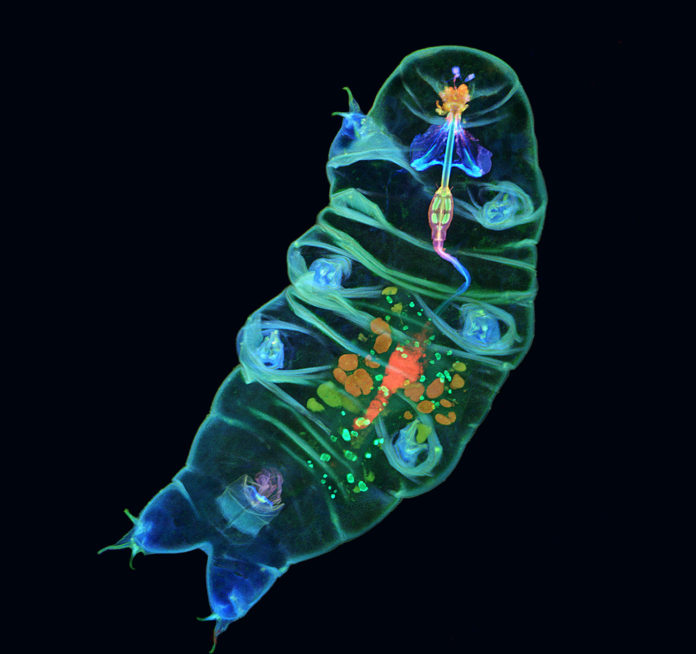 Tagide deCarvalho, who photographs water bears known as the world’s most durable animal, won the best scientific microscopic photo award in Olympus Global Image with a photo he took with the fluorescent painting technique.

The most durable living creatures of the world, which are mostly known by the name of “water bear”, are very photogenic creatures besides being able to live in all kinds of living conditions. These creatures once again proved how photogenic they are. A researcher photographing these creatures won the best scientific microscopic photography award in Olympus Global Image. The photo, taken by Tagide deCarvalho, director of Keith Porter Imaging Facility at the University of Maryland, allows us to get to know these amazing creatures better.

The Tardigrades managed to survive in places where many living things did not, and received the title of the most durable creature in the world. Among these places are regions where living conditions such as space are close to impossible. These miraculous microscopic creatures, which can survive for long periods of time in environments such as high pressure, temperature, radiation, oxygen deficiency, which have restricted the possibility of living, have gained a lot of popularity in terms of their appearance.

Fluorescent dyeing is used in the photo
DeCarvalho, who photographed the water bears, which is considered as one of the proofs that an extraterrestrial life may exist, used fluorescent painting to better show the creature’s internal organs before this image taken with a confocal microscope.

deCarvalho summarizes the vividness of the photograph, saying “I can produce many more colors in the images I capture by using many fluorescent dyes and by supporting the natural fluorescence of the samples”. “I am very happy to capture this image because the fluorescent dyes I use; deCarvalho will receive a $ 900 Olympus OM-D E-M5 Mark II mirrorless camera as a reward for the competition he won.