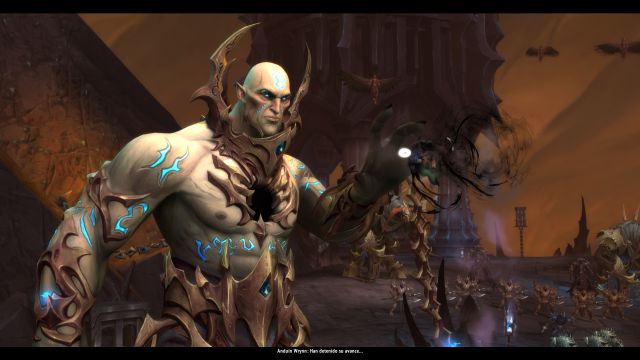 World of Warcraft Shadowlands, the eighth expansion of the best-known mmorpg, comes to PC breaking away from its original story to offer new adventures.

Almost four million gamers are already enjoying Shadowlands, the new expansion for the Blizzard World of Warcraft mmorpg. The Californian company, with its reputation on the tightrope after a few years of bad decisions, is playing it with new original content with which it intends to turn the folklore of the franchise around.

Because the expansion, as our colleague Fran already advanced, puts aside the dimes and diretes of the first titles of the saga to enter a plot as new and mysterious as the Shadowlands. This is, our analysis, of the eighth expansion of World of Warcraft; Shadowlands.

Welcome to the Shadowlands

The anticipation for this new content for the most successful mmorpg of all time was maximum. Blizzard has thrown itself into the void —or into the Maw, if the joke allows us— offering the player new territories and plots to explore with the characters that have accompanied us since the first video game in the saga – of the RTS genre. However, it has little else in common with previous expansions as we are facing an adventure that moves away from the preset to create a new course in the world of World of Warcraft.

Now, on Azeroth, the veil between life and death has been broken. His culprit, Sylvannas. The inhabitants of the planet Titan do not know what plans Windrunner has for them, only that she is allied with the Outcast, Zovaal, better known as the Jailer, the governor of the Maw. Since then, the flow of souls has been affected in the Shadowlands, all ending up in the Jailer’s territory. Creepy to say the least.

Creating new stories from scratch requires the player’s attention and for this Blizzard has decided that the expansion begins in A and ends in Z. This forces each and every one of the maps to be completed in order until absolutely everything is unlocked, including the dungeons. This decision is up to the consumer’s taste but the truth is that it seems more than correct to us since in this way the player does not lose the thread of what happens in the plot.

There are five new main maps – Bastion, Maldraxxus, Ardenweald, Revendreth, and The Maw – each with their own ecosystem, different enough from each other not to bore the player, and with two new dungeons in each area except for The Maw. , which has its own high-level dungeon called Torghast. These dungeons have some playable new features – not too many – and their mythical versions with slight changes, the star content of World of Warcraft since its launch in Legion.

It is important to note the new sanctuary city, Oribos, a kind of Tower of Karin that enters without pain or glory for the eyes except for its majestic exterior and Las Mauces, one of the key places in the Shadowlands for what it means and what there we will live. It is time, then, to talk about this scenario and its Tower of the Damned.

It may seem from the side that we are talking about a horror video game and not a World of Warcraft expansion, but these three adjectives are what you are going to feel in Las Mauces, a dark and sinister place, of a moderate to high difficulty , in which we are harassed at all times. Every action we take there will attract the gaze of the Jailer – which will be highlighted in a new element of the game interface – at different levels. From enemy sieges, immobilizations or kidnappings; we will not be calm at any time. The best? There is no place to rest in the Maw, no mounts or flying points. There you will survive, to fight for your life and your Styx, an important currency that opens on that map and that we can lose if we do not pick up our body after we die, a la Dark Souls.