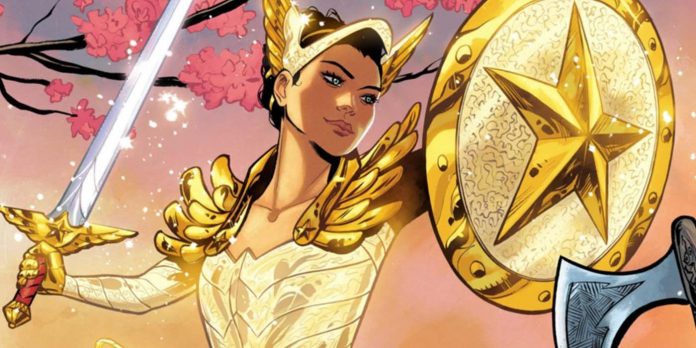 After being killed by a Pariah and the Great Darkness, Wonder Woman travels to a world without the Justice League and gets a brand new golden armor when she enters a new terrain. The screenwriter of “Worlds Without Justice League: Wonder Woman #1” Teenie Howard shared a look at Wonder Woman’s gorgeous new golden suit and weapon, telling about a completely new adventure for the hero when she appears in a world that is her biggest dream, but in fact, a nightmare.

Wonder Woman and the core members of the Justice League embark on their own dream world as the Pariah creates realities to hide the heroes after killing them before DC Comics’ recent Dark Crisis event. Just as Flash finds himself in a world designed to keep him happy and restrained, Wonder Woman will find herself in her ideal reality, which is an illusion created by a villain who distorts reality. In Worlds Without Justice League: Wonder Woman #1, the hero will exchange his usual costume for a golden armor that makes the hero really shine.

Teenie Howard has shared new art for the upcoming episode “Worlds Without Justice League: Wonder Woman #1” from DC Comics, which shows off the new golden armor of the hero. On the first cover from the artist of the issue, Leila Del Duca, Wonder Woman shows off her entire golden ensemble, which includes a headdress with wings, a star sword and shield, as well as stunning armor with details similar to feathers. See the cover of “Worlds without Justice League: Wonder Woman No. 1” below.

The second cover, shared by Howard, shows Wonder Woman emerging from a waterfall in her golden armor, preparing to attack a group of mysterious villains with guns. The 1:25 scale promotional cover by Al Barrionuevo gives readers the opportunity to get to know her new costume in action.

Check out the query “Worlds Without Justice League: Wonder Woman #1” from DC Comics, which teases a new reality that Wonder Woman is about to join with her new golden armor. The preview also teases a backup story with a Martian Hunter starring Dan Waters and Brandon Peterson.

When Pariah and his forces of Great Darkness devastated the most powerful superheroes of all time, all hope was lost… still. To activate his combat weapon, Pariah captured every member of the Justice League and imprisoned them in worlds corresponding to all their dreams and desires… while the planets themselves slowly devour their inhabitants. As Wonder Woman begins a new chapter in her life, the Pariah uproots her into the reality he controls — how does the Amazon princess adapt? In addition, Dan Watters and Brandon Peterson are joining forces to create a noir story featuring a Martian Manhunter! Where there is life, there is hope, and with that hope comes a deeper unraveling of the tapestry of the biggest DCU event of 2022!

Although Wonder Woman has worn gold armor before, her latest costume looks unique to her. The headdress, weapons and costume details give Diana a fantastic new look, which is undoubtedly worthy of being worn by the hero. But will Wonder Woman be able to free herself from the mirage created by the Pariah and return to life, or is she destined to fight forever in her new golden armor in a reality specially created for her? Readers will learn more when DC Comics’ “Worlds Without Justice League: Wonder Woman #1” hits comic book stores in September.

The Witcher – Season 2: Reveal New Details of The First...