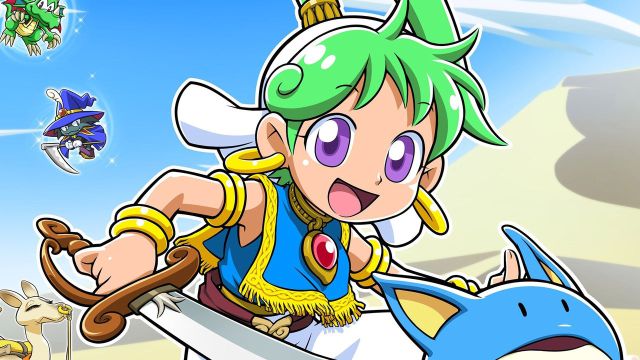 The Wonder Boy IV remake will have physical editions on PS4 and Nintendo Switch; its launch in the West is expected in the second quarter.

ININ Games and STUDIOARTDINK have unveiled a new trailer for Wonder Boy: Asha in Monster World, a complete remastering of Wonder Boy IV (1994, Mega Drive) for PlayStation 4, Nintendo Switch and PC via Steam. The title is being developed by the Japanese team Artdink with Ryuichi Nishizawa, creator of the Wonder Boy / Monster World saga, in command of the direction. If it was first confirmed that the game will be available on April 22 in Japan, we now know that the West – both Europe and North America – will receive it at some point in the second quarter of 2021.

At the moment there is no confirmed publisher who will be in charge of an eventual distribution in physical format of the video game, but we already know what the physical editions will be like; very ambitious in content. Of course, it is confirmed that other members of the Wonder Boy saga are working at Artdink, such as Shinichi Sakamoto in sound work, Maki Ozora in character design, and Takanori Kurihara in the management of the creative department. In addition, all copies will include the original video game, Monster World IV; Although only on Nintendo Switch it will be included in the cartridge, since on PlayStation 4 it will be a download code.

As far as news is concerned, beyond the graphic update with 2.5D graphics and a development of the story that will seek to be faithful to the original work, it should be noted that we will have voices for the characters and subtitles in several languages: Spanish, English, Japanese, German, French, Italian and Chinese. An easy mode, new scenes and animations are also added with the Shinichi Sakamoro soundtrack in a fully remastered way.

The price of the Limited Edition is 39.99 euros on PS4 and Nintendo Switch. This edition will include a physical copy of the game for PS4 or Nintendo Switch, the original Mega Drive artwork from Monster World IV, a manual with the classic Mega Drive structure and a reversible cover.

The Collector’s Edition will be priced at 99.99 euros and will include, in addition to everything discussed in the Limited Edition, a double-sided poster, a map, two soundtracks (the original and an addition with remixes), an acrylic figure, a sticker, a magnet, an art book, a stamper and a Squishy Pepelogoo ball.

But there is still more, because for 179.99 euros there is the Mega Collector’s Edition, which will include all of the above plus an Asha and Pepelogoo figure, a Mega Drive-style case, a certificate of authenticity, a pin, a registration card. and a vinyl for the adhesive console.

Call of Duty: Warzone, settings of most unstable weapons