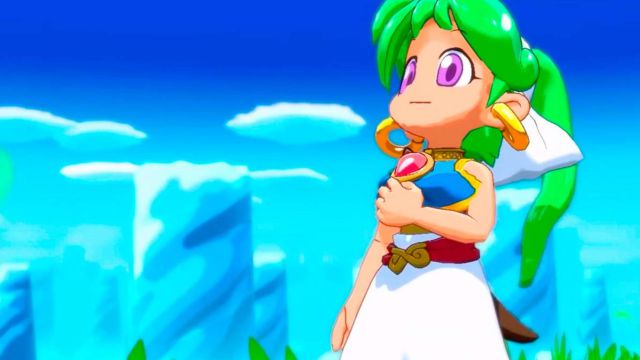 Like The Legend of Zelda and Metroid, the SEGA saga turns 35 and celebrates it with a physical edition. Tesura Games has reached an agreement with ININ Games for the exclusive distribution of Wonder Boy: Asha in Monster World in physical format.

This remake of the fourth installment will arrive on May 28 to PlayStation 4 and Nintendo Switch in Spain. Its launch occurs at an important moment for the saga, since it is its 35th anniversary. That’s why the original Westone team has come together for the revival of this classic.

The remake, which not only updates the graphics, but also the sound and other aspects, respects the legacy of the original and adapts it to a more modern visual style. In this adventure, Asha tries to rescue the spirits to save the world from destruction. During her journey, she will have Pepelogoo, a blue friend who will accompany her on her dangerous mission. In addition, she will travel throughout the kingdom in search of treasures and coins.

In the vein of other remakes of this style, the most nostalgic players will also be able to return to their past and enjoy the original version of Monster World from Mega Drive.

These are all the news of the remake:

For the first time ever: the main characters have a voice
Remastered graphics with cool 2.5D cel-shading design
New and dynamic scenes and animations
Remastered sound and soundtrack by Shinichi Sakamoto
Extra easy mode, now everyone can enjoy the game!
Includes original Monster World IV from Mega Drive!
Directed by Ryuichi Nishizawa, the original creator of Monster World IV
Monster World IV is a platformer title that originally came out in April 1994 for the Mega Drive. The title, developed by Westone, was published by SEGA. Important developers such as Shinichi Sakamoto (sound), Maki Ozora (character design) or Takanori Kurihara (from the creative department) have participated in the development of this remake.

Sends the results of tests with CoronaVac to Anvisa