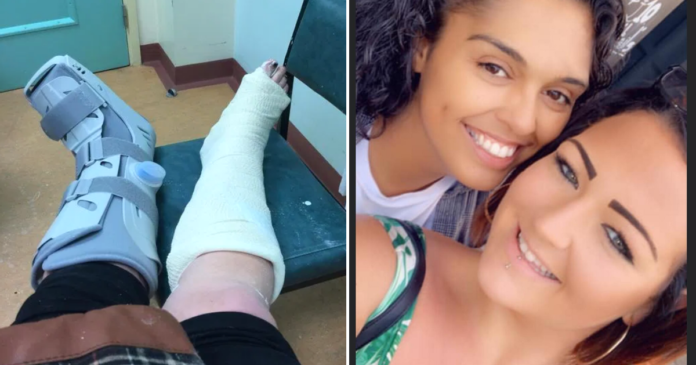 One of the most popular social media platforms of recent years, TikTok continues to come to the agenda with viral dance movements. A 27-year-old woman, who was deeply involved, broke both ankles while trying out her new dance challenge called Oh Na Na Na.

TikTok, a video sharing application developed by the Chinese technology firm ByteDance, has become more popular than ever at this time when people are shut down because of a coronavirus pandemic. So much so many people who say that I don’t download TikTok even if I die are now almost fans of the app.

Even if your path never intersects with the TikTok application, you should be aware of dance currents budding on the platform and viral on social media in a short time. One of them, the new dance trend known as Oh Na Na Na, is a favorite of many people these days.

A woman named Sapphire Charlesworth, who wanted to try this dance with her friend to stimulate her isolation lifestyle, found herself in the hospital’s emergency room. Practicing with his friend Naadjele Lartey on April 15, the 27-year-old British broke both ankles.

27-year-old woman who wanted to join the Foot Dance Challenge movement broke both ankles
Charlesworth said that they did not shoot themselves and practiced only, “When I tried to return, I slipped and heard the sound of bones falling down. I was so hurt but my wife thought I was exaggerating. We called an ambulance immediately after my foot swelled a lot. ”

The unfortunate woman, who was taken to North Durham University Hospital, received the news that both her wrists were broken. While Charlesworth, whose one foot is cast in a plaster and the other foot is worn with boots, calls attention to everyone who wants to try the Foot Dance Challenge, he points out that dance is not as easy as it seems.