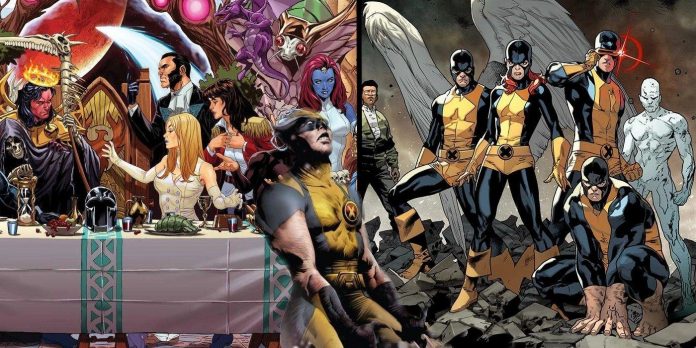 Attention: spoilers for Wolverine No. 22 are ahead!

The X-Men have changed so much that they can hardly be distinguished from their original idealistic self, and Wolverine has stumbled upon convincing proof. While still arguably a force for good in the world, the X-Men have now become their own nation of mutants, primarily concerned with their own reproduction and survival. However, the grave of their original mission still exists, and it is a tragic sight.

The X-Men began as students of Charles Xavier and an elite squad of heroes designed to show humanity and the world that mutants have nothing to fear. Unfortunately, the legacy of Xavier’s secrets and lies, combined with constant attacks from other mutants and hateful people, led to the X-Men falling and disbanding many times. Finally, when the X-Men moved to the island state of Krakoa, and also founded a colony on Arakko (planet Mars), the mutant species became an independent political body. Controlled by the Silent Council, they speak not only for Xavier’s X-Men or the Magneto Brotherhood, but for all mutants.

It is in “Wolverine #22” by Benjamin Percy and Adam Kubert that fans see what has become of the X-Mansion, Xavier’s school and the original home of the X-Men. Wolverine unwillingly teams up with Deadpool in pursuit of the mysterious briefcase. Wolverine is imprisoned with his partner. However, they are able to escape when Wolverine cruelly exploits the situation by using Deadpool’s most hideous power: namely, by chopping him into pieces and passing him through the bars, knowing that his healing factor will save him. After a torturous chase, Wolverine and Deadpool find the contents of the briefcase and are rescued by Blind El. After a moment to catch their breath, they follow the briefcase signal to the next destination – the X Mansion – and find it completely in ruins. There is nothing that could reflect the generations of mutants who passed through those halls, who laughed, who studied, who fought.

In the past, the life of the X-Men at Xavier’s School was full of hope and optimism, and mutants learned to use their unique abilities and make the world a better place. This mission statement was the heart of the X-Men: Although the leadership changed frequently, the school was a refuge for the persecuted, who represented the dream of a better tomorrow. When the X-Men moved to Krakoa, that dream was left behind. Now the focus is on international politics and ensuring the place of Krakoa in the global and interstellar community. An example of this shift in emphasis is the addition of characters such as the evil Mr. Sinister to the ruling body of Krakoa, and the Beast becomes a villain in all but name: the optimistic scientist became cold and merciless in the name of protecting Krakoa.

While the X-Men may be stronger than ever, there is no greater sign of lost innocence than the collapse of Xavier’s school. After leaving their territory, the X-Men also abandoned the hope and idealism that she represented. Now Wolverine and Deadpool are finally back: chasing another devastating mystery that only shows how low the X-Men have fallen.