Home Tech With the System Latency Challenge, Nvidia Rewards The Fastest In KovaaK’s 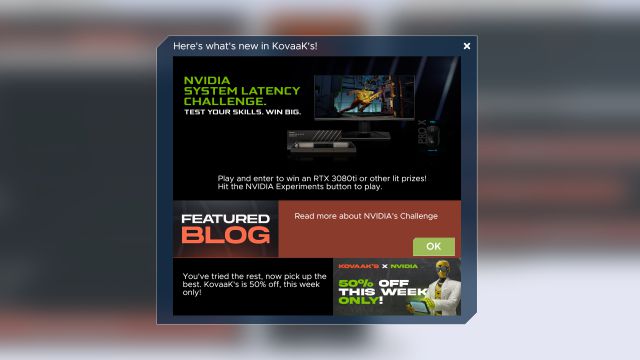 Nvidia: Testing your computer’s latency and reflexes. The Californian company, NVIDIA, together with The Meta, have announced that through the KovaaK’s game they will test both the latency of our computers, as well as our reflexes. All of this will be possible thanks to a challenge that both have developed as part of the promotion of the well-known Nvidia Reflex patent, which seeks to improve the ability of all players seeking to win competitively.

How can I participate in the System Latency challenge?

These competitions will take place from December 14 to January 21, 2022 through KovaaK’s.

What are the challenges?

KovaaK’s is a game that serves as marksmanship training that can well serve us to improve our skills in games such as Apex Legends, Call of Duty: Vanguard, Fortnite, Valorant among others and basically consists of a series of varied exercises focused on marksmanship.

This game is available for free on the Steam digital store and has a weight of 7.85 GB.

Twitch Claims Sensitive User Data Has Not Been Compromised