Home Sport “With or without a beard!” – Liverpool teammates praise Alisson as “the... 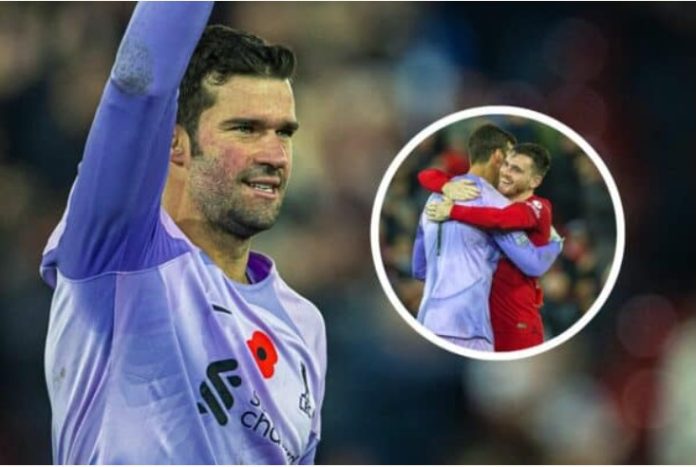 When Liverpool finished the first part of their season with a victory over Southampton, many of the Reds players were full of praise for Alisson, who showed another brilliant result in a completely new look!

Coming into the break with a 3-1 advantage, Liverpool had one or two nervous moments in the second half, and not for the first time this season they were rescued by Alisson.

The Brazilian, who is now heading to Qatar for the World Cup, made a series of excellent saves, providing Liverpool with all three points.

James Milner and Harvey Elliott were among those who praised Liverpool’s first player after the game and couldn’t help but mention his new beardless look!

“I think he’s going to have to shave his beard every game now,” Elliott told LFCTV on a full—time basis.

“He has kept us in the game so many times, and to be honest, there is nothing new from Alisson in this. He’s an incredible goalkeeper and also an incredible person, so we’re all very proud of him.

“For us, he’s the best goalkeeper in the world, and playing alongside him and knowing that you feel confident when he’s standing in goal is always a nice feeling.”

Meanwhile, Milner made a similar comment regarding Alisson’s decision to get rid of the beard!

“Ali probably had a little more work than we would have liked, but he’s world class, so that helps us a lot,” he told LFCTV.

“With or without a beard, he’s equally good. Well, that’s nice.”

It was a momentous day for Milner, who became only the fourth player to play 600 Premier League games on Saturday.

Andy Robertson was among those who congratulated Alisson and Milner on social media after the game.

Elliott, who gave an excellent assist to Darwin Nunez in the first half, was among the other Liverpool players who expressed joy at the victory.

Nunez’s performance was one of the main sources of inspiration in the victory, when Liverpool won four in a row for the first time this season.

Slowly but surely, the Uruguayan silenced all the doubters he had earlier this season and is confidently heading for the World Cup.

It has been a difficult start to the campaign for the Reds, but it was vital that they finish the first period of their season with six points in two games against Tottenham and Southampton.

Let’s hope that everyone will pass the break in the World Cup unharmed!

Rumors of a Steelers Quarterback Swap ahead of the season