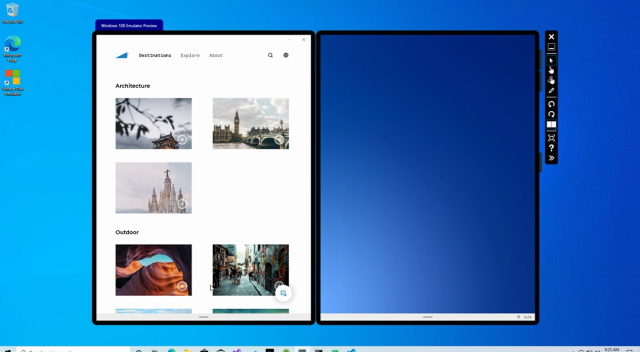 Designed for foldable devices that come with two screens, the Windows 10X operating system will make the modern interface that comes with Windows 10 more functional. One of the biggest changes in the new version will be the Action Center.

Announcing a new operating system called Windows 10X in October of last year, Microsoft promises to offer owners of dual screen and foldable devices such as Surface Duo / Neo, a better Windows experience than ever.

The operating system, which has a very modern appearance, attracts attention not only with its design, but also with the notification screen named Action Center. Technically, the same approach as in Windows 10 includes Bluetooth and network settings, airplane mode, location permissions and many other useful functions that you can activate without opening a new window.

Windows 10X stands out with its modern and user-friendly interface
One of the innovations that Windows 10X will offer in the Action Center will be the notification grouping feature. The feature that will gather notifications from an application under one roof will enable users to get rid of the notification complexity.

As you can see from the screenshots, the design has been significantly improved. In Windows 10X, there is a small X in the upper right corner of each notification box. Users will be able to turn off the notification by sliding this button if they wish.

We know that Windows 10X will have dark mode support, but in shared screenshots, it appears that the notification boxes still use the open theme. Still, when we think that the work on the operating system has not yet been completed, we can say that the application of the dark theme for notifications can be implemented over time.