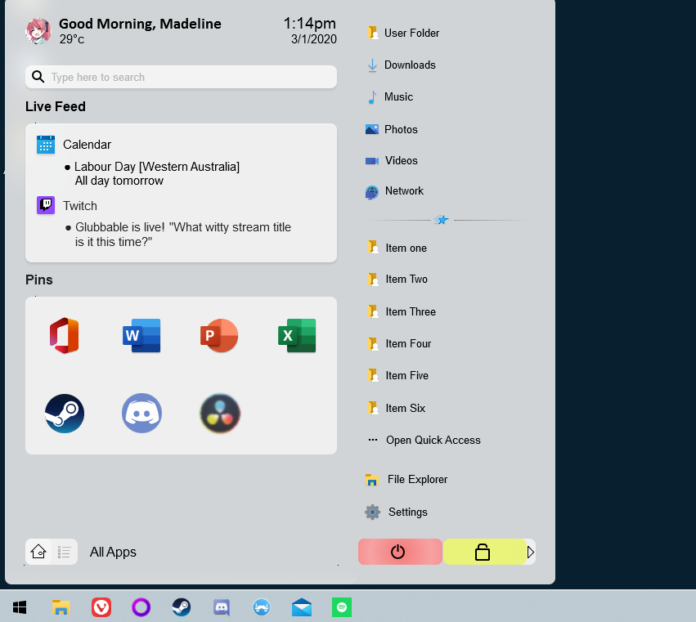 An independent designer shared the Start menu concept that he developed in line with Windows 10 and Windows 10X. This concept design, which has a very simple structure, can offer an impressive experience especially to Windows 10X users.

US-based technology giant Microsoft is currently working on an operating system called Windows 10X for foldable and dual-screen devices, while doing everything in its power to give existing Windows 10 users a better experience.

Start menu prepared as a concept design
This Start menu developed for Windows 10 has a very plain look. When creating this design, the developer chose to add the maximum detail he could add to a particular section. In this way, users of the world’s most popular operating system reach the maximum number of settings and features through a single menu.

The developer has added some application icons on the left side of the Start menu and a button to access all applications. The developer added the weather, clock and a search button to the left, and transferred the data in the Calendar application to view daily plans. When we look at the right side of the menu, we come across some quick access ways and various folders.

The most striking aspect of the Concept Start menu is its extremely simple structure. It should be clearly stated that this situation will be of great importance for Windows 10X users. Because Windows 10X will give life to devices of average size for at least a while. This reveals that it will be a busy and crowded Start menu view for users. However, the simplicity in this concept design can win many users.

It is not yet known exactly how the Start menu of Windows 10X will look. However, there is a known fact that Microsoft will talk a lot with Windows 10X. Let’s see what the time will show, and will Microsoft be able to shape the future of Windows 10X, especially the foldable screen devices, as he wants.

All that can appear in Resident Evil Village: Direct

The Platform That Fit Your Existence On The Internet In A...