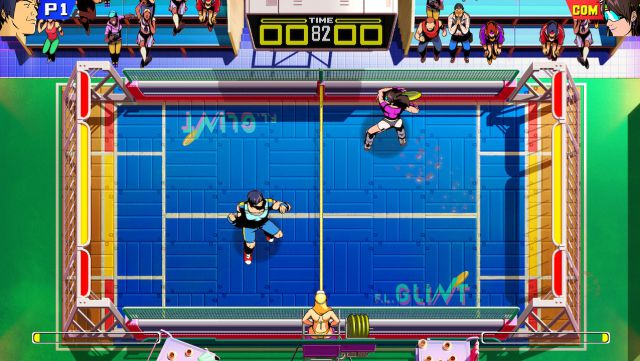 Windjammers 2: One of the most mythical arcade games of the nineties comes back to life with a sequel made in Dotemu. Gameplay above all things, but little else. Some of us have grown up with arcades as authentic sanctuaries where we could rub elbows with older kids and earn their respect, even if it was for a day. Memories mark us, and Windjammers is one of those that if you have played, it has been engraved on fire. But it was also a great game. His idea: one-on-one games throwing a puck and trying to score points. As simple as this. And as addictive as this. The title came back a while ago at the hands of Dotemu, who is now launching a sequel that seeks to follow the path of the success of Streets of Rage 4, both with a similar visual style that is very much a trademark of the French team.

If someone asks what’s so special about Windjammers, it’s clear that it’s its bombproof gameplay: the ability to make yourself understand that it’s your skill, and nothing more than that, that defines victory and defeat. It is a one on one where we have to reach 15 points before the rival, throwing the puck and scoring points at the bottom of his goal; whoever wins two sets, wins the matchup. From there, the base game allowed you to dart around, throw with various effects and directions, slam the puck up and charge up a powerful shot or launch a special attack, as well as try out Vaselines and other minor details. Windjammers 2 maintains all this and adds new mechanics, successful in the vast majority and that bring depth, rhythm and variety to the games more than outstanding.

One of the new actions is the ability to jump, something that allows us to crush the puck to try to surprise the rival or even simply mislead him and then touch solid ground and launch normally. In addition to grabbing the disc and throwing it immediately, as always, we can perform the slap shot, which is to hit it before catching it to make an immediate response and that leaves the opponent without reaction; or hit him for dead near the line that separates the fields. To all this are added the charged shots, the personalized shots, the special Vaseline (it rises but then the disc runs at full speed on the ground), shots in circles or the ability to make a reversal if we catch a special shot from the rival.

All of this translates into a higher number of actions than we had in the original experience. The games against the CPU and against other users have many alternatives and are very varied. Responding with a slap to the disc that comes to us and seeing that the rival has not had time to react, is priceless. Or jump to launch a smash from the air, but not do it, touch the ground and cross it to the surprise of the rival. Not to mention the specials: they spawn easily but can be countered, so it’s not uncommon to see them cast and counter each other.

Relic Ruins In Horizon Forbidden West: Where Are They And How...