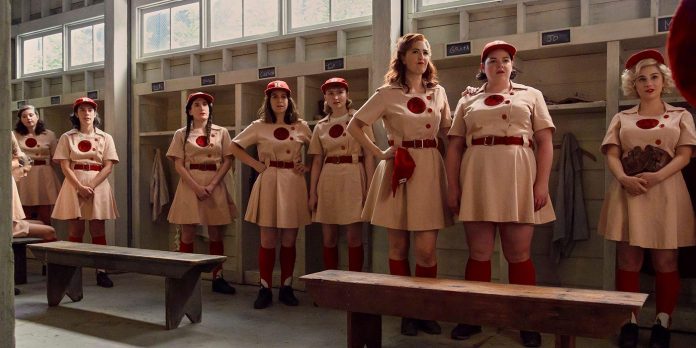 A League of Their Own arrives on Prime Video as a retelling of the 1992 film of the same title. Based on the true story of the Rockford Peaches, an all-women baseball team that played in the All-American Girls Professional Baseball League during World War II, the movie directed by Penny Marshall and the Prime Video series both fixate on the joys and hardships of women playing professional sports in the 1940s.

Created and executive-produced by Abbi Jacobson and Will Graham, as well as executive-produced by Desta Tedros Reff, Prime Video’s A League of Their Own broadens its approach to the classic tale by addressing the experiences of Black athletes in the Negro leagues and LGBTQ+ individuals. The series stars Jacobson as Carson Shaw and Chanté Adams as Max Chapman. Additional cast members include D’Arcy Carden, Melanie Field, Roberta Colindrez, Kelly McCormack, Priscilla Delgado, Gbemisola Ikumelo, Molly Ephraim, Saidah Arrika Ekulona, and Kate Berlant.

Related: A League Of Their Own: True Story Inspiration Explained

Graham and Tedros Reff spoke with Screen Rant about applying the original film’s spirit to Prime Video’s A League of Their Own and expanding the reach of the series’ narrative.

Screen Rant: I love how this show addresses so many issues that weren’t really touched on in the original A League of Their Own. How important was it for you to expand the scope of the original and tell a story that isn’t just about straight, white women?

Will Graham: I think it was really important, mostly ’cause I think that is the real story. I think Penny and the cast, they did something truly groundbreaking in 1992, but there was some ground that wasn’t gonna get broken — partly ’cause it was 1992 and partly ’cause it’s a two-hour movie. So, we have the privilege of getting to tell a story that’s really about this generation of women who wanted to play ball and we feel incredibly lucky.

Desta Tedros Reff: I think at the time, Will was sort of highlighting, just to tell a sports story about women should not have been revolutionary, but it was. So, I think there’s so much that the movie was able to do and so many stories that there wasn’t the time, space, or opportunity to tell, and that’s really what we get to step into with this is to sort of use the spirit of the film but broaden the lens of the stories we get to tell.

It’s interesting to see each character’s individual story unfold while their relationships with one other progress as well. How did you approach the writing process in terms of developing each personal narrative within the overarching story of this group of athletes?

Desta Tedros Reff: The show is about finding your team. It’s a two-hander between Carson and Max. We have the team of the Peaches and Max’s team and Black Rockford. In going into the creation of the show, and we sort of felt like this, it was such an amazing opportunity. Sometimes we’d pinch ourself and be like, “Are we really getting to do this?” We wanted to rob the bank and tell as many stories as possible. I think part of telling those stories is to build them in a narrative that feels deep and authentic, so I think we just wanted to feel like these were people in the world, much how you talk about how the movie feels.

Will Graham: Yeah. I think it’s also we all need teams to do anything extraordinary that really matters to us, including making the show. We had an incredible team making it. So, like you said, we’re really telling the story of a team, and then and the individuals on the team and how they’re affecting each other on both sides of the story.

What will fans of the original movie be most excited about?

Will Graham: I think what fans of the original movie are gonna find in the show is the same spirit, heart, humor, really flawed characters.

Will Graham: Awesome baseball, and you’ll find some fun easter eggs and nods to the original movie. You’ll also see that the show’s gonna do something different and it’s gonna bring you a lot that the movie didn’t. We don’t really see this as a reboot of the movie. It’s more of a reimagining or kind of like the show and the movie are cousins. We’ve been so lucky to get support from Geena Davis, Rosie O’Donnell, the rest of the cast. Lori Petty’s been really nice about it in interviews. We appreciate that.

Desta Tedros Reff: Hopefully people are going to come and be excited by and feel the spirit of the movie, and leave engrossed in a much bigger story in a much bigger world. And also the fun easter eggs that we winked and nodded to.

Will Graham: Yeah. But this story — people know the movie — but for us, this is really about the real stories underneath it and we’re looking at that through the amazing tone and feeling that Penny and the cast established.

Can either of you speak on the show’s future or what you’d like to see next?

Will Graham: We’re already greenlit for 12 seasons. No, we’re working now on season 2 of the show and we’re also just trying to be in the moment. This show means a lot to us and to everybody involved in it. It’s way more than just a show, and like Desta said, it’s kind of like a moment that you pinch yourselves that you’re getting to, as queer people, tell this story that’s really joyful and fun that really means something to people. So, we’re just excited to get it out there.

A League Of Their Own Synopsis

A League of Their Own evokes the joyful spirit of Penny Marshall’s beloved classic, while widening the lens to tell the story of an entire generation of women who dreamed of playing professional baseball, both in and outside of the AAGPBL. The show follows Carson (Abbi Jacobson) and Max (Chanté Adams) and a new ensemble of sharp and hilarious characters as they carve their paths toward the field, along the way finding their teams and themselves.

Check back throughout the week for the rest of our interviews with the cast of A League of Their Own.