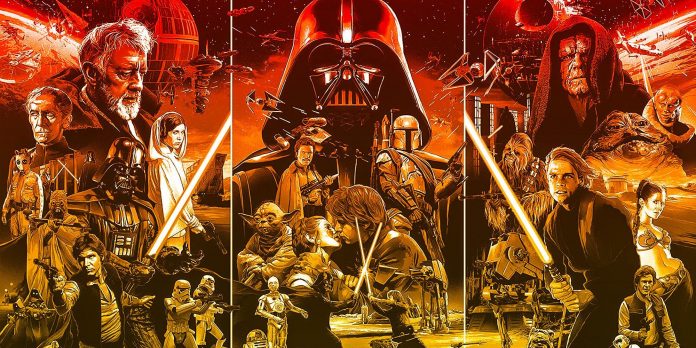 George Lucas was the one to create the Star Wars original trilogy, but Disney acquired the rights after purchasing Lucasfilm and 20th Century Fox and has not released the original cuts since. George Lucas was the primary filmmaker and mastermind behind the Star Wars universe and he created Lucasfilm in 1971 to act as a production company and visual effects studio. Lucasfilm produced iconic films like Indiana Jones and The Land Before Time, as well as Star Wars. After Disney purchased Lucasfilm, the company had some dealings that meant they originally did not get all of Star Wars, but what is stopping them now?

The original Star Wars trilogy had multiple re-releases since the special editions were first released in 1997, and these different releases alter much of the content of the films. Changes in the Star Wars films included various updates to special effects, expansions of scenes, and a title change. Later re-releases even added dialogue and characters, and eventually replaced the force ghost of Anakin Skywalker, originally played by Sebastian Shaw, with Hayden Christensen who played the role in the prequel trilogy. Audiences are often divided on whether the updates helped or hurt the Star Wars films, most often dependent upon which version they saw first.

How To Watch The Unaltered Original Star Wars Theatrical Cuts

Currently, the only way to legally watch the unaltered original Star Wars theatrical cuts is to find copies of the 2006 DVDs or VHS tapes, with some of those being available for a high price online or through auction. There are fan edits online, most notably Harmy’s Despecialized Edition, which is a Star Wars fan-created version of the original theatrical releases that aims to recreate and preserve the original versions of the Star Wars trilogy. There are alternative fan projects, but Harmy’s Despecialized Edition continues to be the most popular. Unless there happens to be a yard sale with the original VHS tapes or 2006 DVDs, finding the unedited original Star Wars trilogy can be expensive and difficult.

Does Disney Own The Rights To The Original Star Wars Theatrical Cuts?

When Disney originally purchased Lucasfilm in 2012, they didn’t acquire the entirety of the Star Wars franchise. The terms of their initial agreement, which had Disney spending a whopping 4 billion dollars, stipulated that Disney would have the rights to The Empire Strikes Back, Return of the Jedi, and the prequel trilogy in 2020. George Lucas and Fox were partners on A New Hope, so the film was to stay with Fox. Disney now owns 21st Century Fox, meaning the entire franchise is under the same House of Mouse roof. By purchasing both Lucasfilm and 21st Century Fox, Disney owns the rights to the original Star Wars theatrical cuts, but whether they will actually release them remains a mystery.

Why Disney Should Release The Unaltered Star Wars Original Trilogy

Disney could easily profit from releasing the theatrical cuts of the original Star Wars trilogy. Whether it is a Blue-ray DVD release, or on streaming, many viewers would be delighted to see the films in their original form once again, and they have been asking for it for a long time. Disney releasing the original cut would allow fans who didn’t get to see the theatrical release a chance to do just that and to see an important part of movie history. This would follow a precedent set when Warner Bros. released Zack Snyder’s cut of Justice League on HBO Max, providing fans with the content that they were requesting to be able to see another version of the movie.

Will Disney Ever Release The Unaltered Original Star Wars Trilogy

When George Lucas updates the original Star Wars trilogy in 1997, he called the theatrical releases a “rough cut” of the film, referring to the newer versions as the “final cut.” He believes the theatrical cut of Star Wars “will disappear. Even the 35 million tapes of Star Wars out there won’t last more than 30 or 40 years… the only version anyone will remember will be the DVD version…” This final cut has been altered since, resulting in more tweaks to the films and ushering the Star Wars trilogy even further from its original cut. Though Disney owns the films and Lucas no longer has a say in what happens, it’s unlikely Disney will go against his wishes on the theatrical version of the original Star Wars trilogy.

With Lucas’ heavy stance against the original cut, this will not be the same as with Snyder, as both he and the fans wanted the Snyder cut to be released. Fans continue asking for the original cut, but Disney has only owned the entirety of Star Wars for about two years and it seems much of their focus is on creating new content. Disney has not made any moves to release the unaltered cuts of the original Star Wars trilogy, and at this time there are no known plans to release them in the future.