Home Celebrity Will BTS come to Mexico and give a concert in 2022? 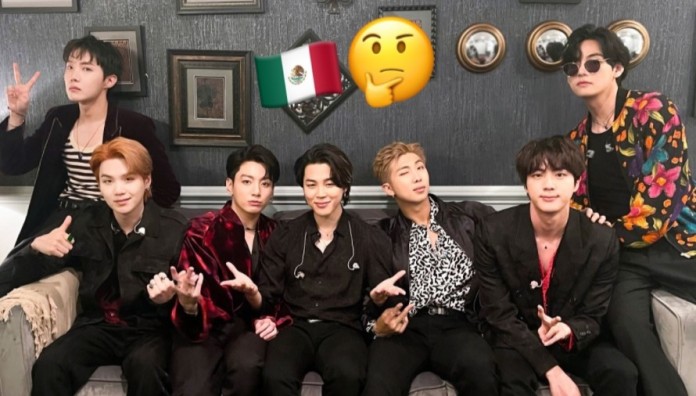 Last November BTS surprised their fans with four face-to-face concerts, which, in addition to breaking several records, gave them the opportunity to sing again in front of their fandom after two years. Thousands of people around the world traveled to Los Angeles to see Bangtan and fans wondered if they would come to Mexico or other countries and at Sónica.mx we give you these reasons why they should come.

After the last concert that took place at the SoFi Stadium and was also broadcast on the Internet, it was announced that Bangtan would have face-to-face concerts in March 2022 and with this, alerts within ARMY about a possible world tour went up more than ever.

Days later, HYBE announced that BTS would be taking a break and that they would return until March with a new album and ready for concerts in their country. However, hopes for a world tour remain throughout the fandom as the vast majority of countries have advanced in their vaccination schemes against COVID-19.

Good memories of your previous visits to Mexico

BTS has had the opportunity to come to our country on several occasions and they have heard how ARMY MX supports them. However, it would be a pleasant experience to see how their fandom has also grown exponentially in the Aztec lands and that they can make important memories with their music.

We do not need to go very far, it is enough to follow the accounts that monitor the stream of BTS in Latin America and the world to realize that Mexico is in the first 5 places with the most reproductions of Bangtan’s music. At the same time, it is one of the countries that mentions the band the most on social networks and that most of their products are looking for.

They have never had a concert of their own

Although they have come several times, they have not had the opportunity to have a face-to-face concert only by them. With the rise of ARMY in recent years, it is a fact that they deserve several dates in our country to pamper their Mexican fandom. In the Sónica newsroom, we started to imagine what a concert would be like at the Azteca Stadium or at BBVA.

BTS’s merch in Mexico is a success

When the Pop Up Store: House of BTS came to CDMX it had an incredible success that all its fans from all over the country traveled to the capital to buy a product of Bangtan’s merchandise. However, some of them were sold out and ARMY was left wanting more. It is very likely that in a concert present the merch will end again, I do not know HYBE, think about it.

Mexico has a lot of culture that could entertain you

When they came to Mexico City, Bangtan traveled to the Teotihuacán Pyramids and they made it clear that he had really enjoyed visiting them. Now, the country has a large number of places full of history that will surely make the seven idols fall in love. Can you imagine RM at the National Museum of Anthropology and History?

And so we could continue with an endless list of why BTS would have to come to Mexico in 2022, but so far there is no information on a world tour that includes our country. At sonic we can recommend that you save enough to receive Bangtan as he deserves.