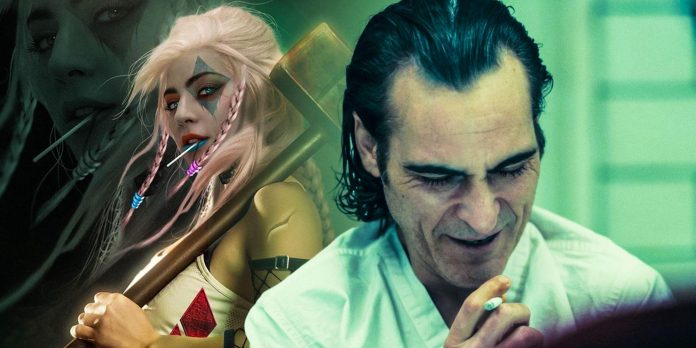 One theory about the upcoming Joker 2, tentatively titled Folie à Deux, could explain the sequel’s rumored muscial storyline. Not much information has yet been released about the sequel to Joker, but with reports about the casting of Lady Gaga alongside lead actor Joaquin Phoenix, and a new movie musical genre, there are questions about possible changes to the dark and gritty nature of the original film. One growing theory suggests how Joker 2 will hang onto what made the first film so unique while introducing new twists on the budding franchise.

Joker gave audiences a fresh origin story for the infamous Batman villain. Phoenix portrays Arthur Fleck, a.k.a. Joker, a clown-for-hire and aspiring stand-up comedian whose mental illness makes living a normal life difficult. Joker is a character study on Arthur, with more grounded and authentic themes that force the audience to root for Fleck as he unravels before becoming Joker, all while painted as the protagonist. Joker’s release in 2019 was ground-breaking for comic book films, attaining huge critical acclaim and taking home several awards including two Academy Awards. The film’s success led to questions about a sequel, with Warner Bros. expressing interest in creating a film franchise adapted from comics released under the DC Black Label, more mature and prestige comics, even though Joker was originally meant to live as a standalone feature.

In 2021, Joker 2 was finally confirmed to be in development with Todd Phillips and Phoenix returning as director and lead actor respectively. In an exciting and unexpected twist, it has been reported that Joker 2 will take the form of a movie musical, with Lady Gaga in talks to star in the role of Harley Quinn, the Joker’s accomplice and lover from the comics. These revelations about Joker 2 have reignited interest in this raw and gritty new direction for DC Films, with many speculating about how the sequel will include elements of a musical storyline while sticking to the beloved intensity of Joker. One theory might explain how Joker 2 can live up to its predecessor.

Arthur Fleck Was An Unreliable Narrator In Joker

Alongside Joker’s main storyline of Arthur’s descent into madness are several side stories that help to ground the character in the real world and play a significant role in demonstrating his mental illness. It’s revealed that has Arthur’s mother, Penny (Frances Conroy), has convinced both herself and her son that Thomas Wayne (Brett Cullen) is Arthur’s real father, even though she had in fact adopted him while working at Wayne Manor and had allowed Arthur to be abused by his real father as a child. Despite being adopted, Arthur seems to share similar delusions to his mother.

Over the duration of Joker, a relationship grows between Arthur and single mother Sophie (Zazie Beetz) after they meet in an elevator. Sophie becomes an important part of Arthur’s life, settling him by going to see his stand-up and sitting beside his mother’s hospital bed. However, Arthur discovers that this relationship had all been a figment of his imagination and that the pair had never met. This is not only a shock for Arthur, but also for the audience, who were led to believe that the relationship was real. This firmly plants Arthur as an unreliable narrator throughout Joker, which will surely play an important part in Joker 2.

It’s reported that Lady Gaga is in talks to portray Harley Quinn in Joker 2. The character has most recently been portrayed by Margot Robbie in the DCEU, but Lady Gaga has more than proved her acting skills in blockbusters including A Star is Born and House of Gucci, and that she is very capable of starring alongside Phoenix in the sequel. The rumored casting of Lady Gaga in Joker 2 backs up the claims of a movie musical genre change since she made her name as a singer before moving into acting. Harley Quinn is famously Joker’s former psychiatrist turned criminal accomplice and love interest, meaning that it was an inevitability for the character to make an appearance in a potential sequel to Joker.

The character of Harley Quinn lends itself to the dual reality split demonstrated in Joker through Arthur’s unreliable narration of certain events, particularly his relationship with Sophie, which was completely fabricated. This is due to the character not only being the Harley Quinn persona, but also that of Dr. Harleen Quinzel, the psychiatrist as Arkham Asylum who treats Joker before falling in love and being manipulated by him. The introduction of this character in Joker 2 would add an interesting new depth to the developing narrative, as we may see Phoenix’s Arthur create a meaningful relationship unlike those he shared in Joker. However, one theory could point to a darker introduction for Harley Quinn.

One Reddit fan theory suggests how a musical storyline can fit perfectly into the darkness of Joker 2. Audiences were shown Arthur’s love for music and dancing in emotionally tense moments during Joker, which could lead perfectly into the sequel. The theory points to the idea that Lady Gaga will be portraying Dr. Harleen Quinzel in the real world, treating Arthur during his imprisonment in Arkham Asylum. All the while Arthur will have delusions of her playing the part of Harley Quinn and partaking in musical numbers in his mind, as the psychiatrist is corrupted and the pair fall in love.

Viewers have already seen that Arthur often fabricates situations or glosses over the darkness, most evident in his relationship with Sophie and the apparently positive reception at his terrible stand-up routine. It seems very likely that singing and dancing musical numbers could take place inside his mind and not at all in reality. This setup would allow Warner Bros. and DC Films to experiment with a new and experimental style for Joker 2, adding color and joy to the dark storyline introduced in Joker, while still staying true to the original film, the source material of the comics, and the character itself. While not much information has yet been confirmed about Joker 2, it’s evident that audiences are excited to see the Joker back on the big screen.

The Star of The Lower Floor Shared an Outrageous Video of...