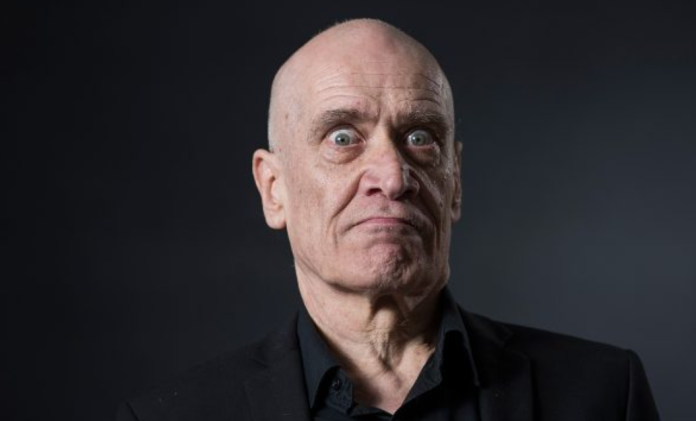 For a genre that seemed to come out of nowhere, punk had a lot of fathers. Iggy Pop, The MC5, The New York Dolls, The Modern Lovers. And in the UK, Dr. Filgood, R&B pub rockers from Canvey Island, whose driving energy and subversive attitude fueled the punk movement, whose legendary guitarist Wilko Johnson died today (November 23), about ten years after doctors gave him just a few months to live.

Known for his volatile percussive guitar playing style and signature “duck walk” stage movement, Johnson was a beloved figure in the music world. After being diagnosed with pancreatic cancer in 2012, he began recording a farewell album with Roger Daltrey (2014’s “Going Back Home”), and Paul Weller told Uncut magazine: “Wilko may not be as famous as some other guitarists, but he’s right there. And there are many people who will say the same. I hear Wilko in many places. It’s some kind of legacy.”

Indeed, in addition to his direct influence on punk, Johnson’s sharp, haunting chords intertwined into new wave bands such as The Jam, Elvis Costello and Gang Of Four, and have since dissipated into alternative rock and pop music for decades. The viability of The Strokes, Vampire Weekend, The Vaccines, and Idles can be argued to have originated at Wilko’s fingertips.

Canvey Island in Essex may not be as exotic as it seems, but Wilco’s youth certainly stretched into the distance. His degree in English at the University of Newcastle upon Tyne included studying Icelandic sagas and then he went to Goa in India before returning to Essex to become a teacher. Having bought his first Fender Telecaster in Southend in 1965, he played in several local bands as a teenager and quickly returned to the pub community as a member of the Pigboy Charlie Band.

By 1971, the band had morphed into Dr Feelgood, naming themselves after a heroin nickname (or an underground doctor wanting to “prescribe” it) and basing their lively British R&B sound on Wilco’s songwriting style and a special guitar style inspired by Bo Diddley and Mick Green from Johnny Kidd and the Pirates. He also attracted attention on stage, twitching and shaking around the stage in a black suit and with a hairstyle in the shape of a pudding bowl, shooting guitar riffs from shoulder height like a machine gun. He was a smart, but at the same time aggressive and adrenaline-fueled personality who eventually influenced John Lydon, Suggs and all sorts of post-punk pop touts.

Having gained a reputation as one of London’s most exciting pub rock bands, Dr Feelgood released their debut album “Down By The Jetty” in 1974. they believe that the recording of blues-punk influenced their creativity: The Jam performed a cover of “Cheque Book” before their fame, and you can notice a copy of it on the cover of The Style Council’s 1985 album “Our Favorite Shop”. The second album of 1975 “Malpractice” entered the UK top 20, and the live album of 1976 “Stupidity”, coinciding with the emergence of the British punk scene, topped the album chart.

However, at the peak of punk in 1977, Dr. Filgood was in turmoil. None of their classic Wilco-penned singles, including “Roxette”, “She Does It Right” and “Back In The Night”, made it into the UK top 40, and amid controversy over the track listing for their third studio album “Sneakin’ Suspicion”. Wilko left the band. There remains some confusion as to whether he left or was fired. Anyway, he soon launched Solid Senders (who would release a self-titled album on Virgin in 1978) and The Wilko Johnson Band, with whom he played for the rest of his life. One key period of “disconnection” came in 1980, when Wilko briefly joined the Ian Dury Blockheads to record their third album, “Laughter”; by 1984, however, he had stolen several other boobies for his own band.

Despite the fact that in the 1980s The Wilko Johnson Band produced studio albums quite fruitfully, in recent decades it has become more sporadic. Ten years have passed between “Barbed Wire Blues” in 1988 and “Going Back Home” in 1998, and thirteen years have passed between the album of covers “Red Hot Rocking Blues” in 2005 and their latest album “Blow Your Mind” in 2018. Meanwhile, Wilko has made several screen appearances that have helped him gain a reputation as a wild and charismatic eccentric — his appearance in Julien Temple’s documentary “Secrets of the Oil City” in 2009 led to a role in the first two seasons of “Game of Thrones” in 2011 and 2012, where he played the silent executioner Seurat. Ilene Payne. “They needed someone really sinister who walked around and looked at people before killing them,” he explained. “This simplified the task. I’m constantly looking at people, it’s my second nature.”

After he was diagnosed with cancer, and against the backdrop of a large fundraising by his grateful comrades in the British rock world, Wilko began to fade away. He played a farewell tour in 2013 and appeared as a guest with Madness and The Blockheads, as well as, having signed with Alan McGee’s Creation Management, on Jools Holland’s Hootenanny show in 2015. saw him declared cancer-free in 2014.

His extra years have been a blessing for him and his two sons, and his music remains a gift to the whole world of alternative music. As Jean-Jacques Bernel of The Stranglers explained, “there is a bridge between the old days and the punk times. This bridge is exclusively for Feelgood, it allowed us to move from one to the other. It’s a connection, DNA.”

One Bridgerton star has never met the cast of a Netflix...